Loss aversion manifests itself in chart-making, as it does in economics.  In chart-marking, loss aversion can be defined as the tendency to avoid losing data at any cost.  Given a rich data set, designers often make the mistake of cramming as much data into the chart as possible.  This is taking Tufte's concept of maximizing data-ink ratio to the extreme, and it often leads to awkward, muddled charts.

Gelman provided a great example of this recently.  See here.

Every piece of data is given equal footing, which results in nothing standing out.  The reader gasps for air.


Here is a recent example from the New York Times, in which the designer showed admirable restraint. 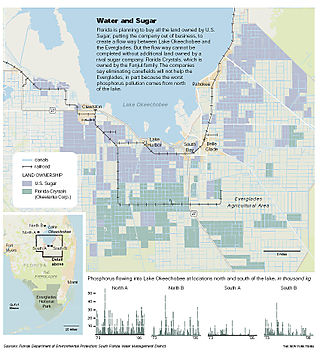 The best evidence is the set of small multiples shown at the bottom.  These give the amount of phosphorus flowing into the lake annually since 1973, as measured from four locations.

The point is that the pollution has been most serious on the northern shores, especially in recent years.  Thus, the Florida plan focusing on the southern region is likely to make limited impact.

The choice of vertical lines is smart, as the typical time-series connected-line chart would jump up and down crazily.  A simple vertical axis marks the amounts, avoiding the temptation to print all the data.  The designer realizes it is the trend, rather than individual values, that is the issue.

Taken together, the three components tell a good story.  This is a well-executed effort.  The Times once again proves itself the leader in developing sophisticated graphics.

To whom it may concern,

I apologize this does not pertain to this post per se, but what software would be used to generate a graphic like this? I have been following this blog and love the entries, but have always been wondering what people at the the Times (as well as others) use to generate these types of graphics.

My background is in Quantitative methods and have recently become obsessed with figuring out ways to visualize the story I am trying to tell.

I appreciate your help!

The dataset used for the first visualization is small (probably no more than 20K in plain text). The second example has more data. So I think that the mistake done in the first example may have to do more with choosing a bad design from the beginning (as explained by Gelman in his post), rather than trying to cram too much data in one chart.

Nice post, Kaiser. Loss aversion coupled with graphical iliteracy not only explains a lot but also helps to find a cure: learn how to prioritize your data.

(BT, I suppose this is Adobe's Illustrator or a similar software. Nothing that you can use on a daily basis is a typical corporate environment.)

Thanks Jorge. I am an avid reader of your blog too! Thanks for all of your help.