As simple as possible but no simpler

In this political season, we are bombarded with soundbites.  For example, we keep hearing about the Red States versus the Blue States.   By coloring states, we endorse the notion that Red State people are conservatives and Blue State people are liberals.  Using sophisticated analyses of real data, Prof. Gelman tells us why this notion is wrong in his recently published book

The key chart is below (courtesy of Gelman). 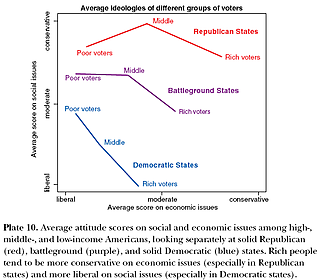 There is indeed a red-blue divide but the gap is much much wider among rich voters (right ends of lines) and the middle class (mid-points of lines) than among poor voters (left ends).  Poor voters are almost everywhere liberals on economic issues, and on social issues, they are moderates leaning conservative.  Rich voters, by contrast, are very polarized on both economic and social fronts.

This is one of those charts that express their messages without fuss.  A lot of data was analyzed but only the statistical conclusion is portrayed, much of the hard work hidden.  Contrast this with data-rich infographics.  In my view, this chart fits the description: as simple as possible but no simpler.

More technically, the above is summarized by saying that the interaction effect (between state residence and wealth) is significant and cannot be ignored.  Prof. Gelman is one of the strongest advocates of always including interaction terms in regression of social and economic data.  And here is an example of why.

The concept of interaction is tough to explain to the business audience, I have found.  In presenting one such chart recently, I found the audience confused by the lines.  Indeed, the lines, their slopes, etc. do not contain any information.  They merely serve as guides to how to read the chart.  In order to see the interactions, our eyes need to trace a path from one dot to another dot, literally tracing the lines on the chart.

Another way to discuss interactions: the common notion of a Red-Blue divide masks the reality that this divide is of varying importance across income groups.  A view that aggregates income groups is too simplistic.

nice!
Only issue I have is with the term 'poor' voters; I thought it was people who tended not to get out and vote!

States are much too large to consider as monolithic entities. When you look at county-level data, you find tremendous social and political diversity within states.

another conclusion I thought of, and correct me if I'm wrong about this:
In Republican states, economic issues are a wedge between the rich and poor, while social issues are unifying.

To anyone who has not read Gelman's book, I highly recommend it. Contrary to SilentD's comment above, state-level election data has many interesting stories to tell, and Gelman makes effective use of graphics to tell them.

Simple is good but it depends on the data story that is being told. In my blog, I show that adding more to this view tells Gelmen's story more effectively.