Andrew N., a reader from Australia, wasn't too impressed with the way National Nine News presents the Olympic medal table on its home page.  To the extent that we want to venture beyond the typical tabular presentation, this bar chart is in fact quite appropriate.  Let me explain.

Lets take a tour around the world.  It's the battle of the data tables. 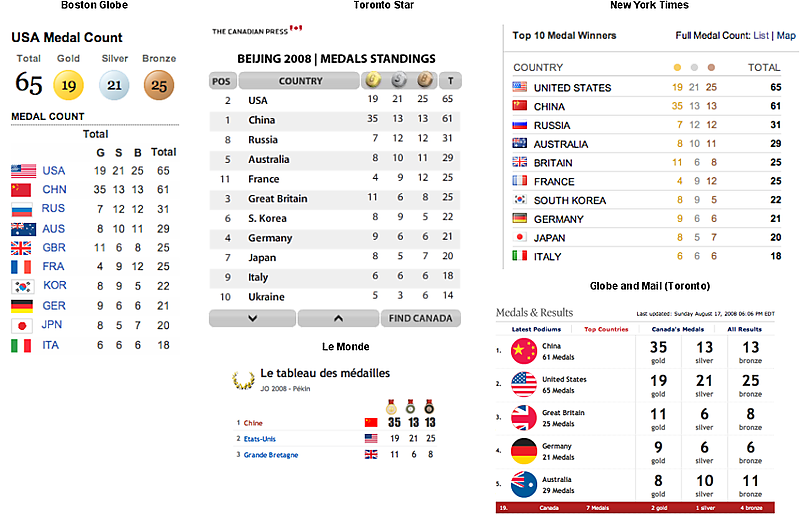 The Boston Globe's is the cleanest of the bunch.  I especially like the way they set up the USA count at the top; the use of country codes is inferior to spelling out country names, as done in all of the other examples.  The New York Times is the only one to utilize colors to set aside gold, silver and bronze, which lets readers easily assess the two dominant metrics, total golds and total medals.  A small touch but very nice.

The biggest design issue here is the existence of the two different metrics.  In any tabular presentation, the countries can be ranked by only one metric so the designer must make a choice.  The American papers present ranking by total medals; the French paper by total golds; the two Canadian ones shown here are split.  The American papers also choose to carry the ranking implicitly while the others explicitly provide a numerical rank.  Le Monde and Globe and Mail provide ranks that are consistent with ordering of countries, both by total golds.  The Star, by contrast, wants it both ways: the order reflects total medals while the "POS" column shows total golds.  This extra column does help the readers who prefer ranking by golds but the primacy of the other ranking has not been overcome.

So what about National Nine News?  I have not been a fan of stacked bar charts but surprisingly, this is a great application.  Stacked bars have the disadvantage that the stacked segments don't share the same base and thus it is difficult to compare their lengths.  Here, though, our two metrics are total medals and total golds so readers should be drawn to compare the total lengths, and the lengths of the first segments.  Those wanting to compare silvers and bronzes must make a stronger effort but they will be in the minority.

What can be improved are the distracting data labels, especially the gold circles.  Instead, one should provide a scale, or use symbols such as one circle per medal.  (See this old post.)  Here is a version with a scale:

One cannot end this post without mentioning the attempt by NYT editors to insert levity into these proceedings with first a cartogram and then a bubble chart.

I wonder if the decisions of the US papers to use total medals to order their tables is at all connected to the fact that the US comes top under that system...

@Tom - I think that has to do a lot with it. Olympic rankings has always been about gold medal totals to judge the winning country. What would be the point if a country wins 100 bronze medals to top the medals total? Boston Global is just pandering to the US market.

I would actually stick the datalabels right in the colored bars, maybe in a low contrast color, for those who do want the detailed information.

how about this for ranking:

And you need minimum 5 gold medals to be included in the ranking.

If Australia had been far down the rankings, I would have understood their showing first, second, and third, followed by Australia. But as there was only one more country to add (Germany, at 4th) to make a full tally of the top five, I wonder why they left it out.

This is a rare good application for a stacked bar chart. Data labels in the bars, or at least gold medal counts in a column to the left of the chart, would fill it out nicely.

PS. Do you really think the Times was "trying" to inject levity, or was it an unintended consequence of their use of bubbles?

In this context, it's probably worth mentioning that there is an obvious correlation between the population or GDP of a country and the number of medals. A more informative visualization would control for this explanatory factor. See the data at Simon Forsyth's page.

derek: they stuck the chart inside a banner and so there is very limited room. Australia happened to be 5th that day, and was lower in the ranks before.
jan & jon: sticking the total golds on the far right of the chart is an option but falls foul of the sufficiency test, i.e. if all the useful data are written as data labels, why need a chart at all?
jon: the bubble chart in particular is a great example of why this chart type doesn't work
aleks: thanks for the pointer. looks interesting.

Here is another graphic:

I teach data visualization. Thank you for this blog. It's a great tool for my students.