A tale on two charts

By now, everyone knows subprime mortgage lenders in the U.S. are in a world of hurt.   The following pair of charts illustrates how serious the problem is.  Lenders track the proportion of borrowers who are "60-day" and "90-day" delinquent, meaning late or no payment in the last 60 or 90 days.  Lenders count on a contained delinquency rate in order to run a viable business.  These loans stretch for often 20-30 years so it is crucial to catch problems early. 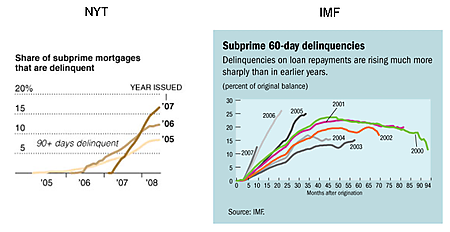 This trend can be seen in the IMF chart (right).  Take the 2000 vintage of subprime borrowers.  The peak 60-day delinquency occurred around 45 months after loan origination, and then tailed off.  (A 60-day delinquent borrower will eventually become 90-day delinquent, or less likely, non-delinquent, in either case causing the curve to tail off.  The tailing off feature is, in fact, undesirable, and can be removed by plotting delinquency rates of 60 days or more, as opposed to just 60 days.  This is what the NYT chart on the left did.)

What do these graphs say about the current malaise? 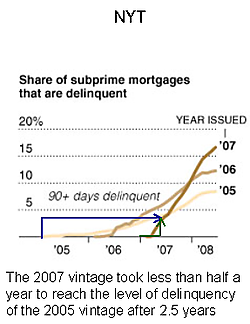 The NYT chart (right) carries its information in the relative slopes of the lines.  The steeper is the line, the quicker borrowers are becoming 90+ days delinquent. Another piece of information is when each curve starts to take off: the 2007 curve lifts off much earlier in the year than the 2005 and 2006 curves.  This last point is less secure because the graphic does not preclude the scenario in which loan origination is biased toward the latter part of the year.   Similarly, the crossovers between one curve and another tell us the extent of the problem compared to the past but again, the reader has to do much work to learn this information, as shown.

The IMF chart took a different view.  If we selected only the 2005-2007 curves and shifted the 2006 curve to the 12 month point, and the 2007 curve to the 24 month point, we would have recreated the NYT chart.  (We gloss over the matter of counting 90+ days rather than 60-day delinquency, and the other matter concerning the recency of the data used.)  Here, the key information is coded in the vertical distances between the curves.  Taking the vertical as shown below, the reader can see that the 2006 and 2007 vintages have performed almost twice as badly right off the starting gates while the 2005 vintage looked normal but worsened significantly after the two-year mark. 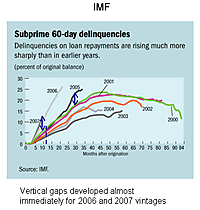 For lenders monitoring performance, the IMF chart is much more useful.  For someone wanting to know the current state of delinquency, the NYT chart is easier to work with.  It must be said that it is always better to plot more history and longer time horizons (like the IMF did).

Finally, can someone please prove a four-color theorem for graphs?  Spraying rainbow colors on charts is a bad habit (for example, also in the house price index charts).

Both charts make things seem like they are getting worse, but that assumes the share of subprime loans remained constant over the past three years.

I feel that the curves in the NYT graph should be turned 90 degrees out of the plane of the page, so they are like ribbons seen end on. Then the 60 days or more, 90 days or more points etc. should be marked as contours, and joined together year to year.

One of these days I should try to get my hands on a proper data set of mortgage delinquencies and demonstrate this graph type by example.