RichmondTom pointed us to this New York Times article, which made what I consider a sloppy argument for the inflation rate being over-stated rather than understated.  This article was accompanied by a colorful and playful chart to describe which components make up the index, and which price changes were most drastic. 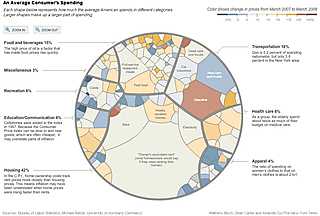 Like most "infographics", this chart has an interactive feature which you need to click here to sample: mousing over the strangely-shaped areas leads to annotations describing the weight of the relevant component, and the change experienced in that component during the past year.  Like Sherlock Holmes holding a magnifying glass, the reader can use the Zoom In, Zoom Out buttons to drill down.

Here is an expanded view on the color scale, with my comments.

We have no issues with the blue or the red & orange regions but what with using light blue and light green for increases between 0 and 4 percent (when all other increases use red)?  Readers not looking at the color palette will be caught off guard, misinterpreting the data.  This is a big problem since those two appear to be the most frequently occurring colors on the chart.

The designer of this chart surely is aiming for entertainment, creating a playground for the data sleuth.  It succeeds if readers take up the invitation to explore the data.  Unfortunately, it is not the most accessible for more sophisticated numerates interested in understanding the data.

It is impossible to ascertain the relative size of pieces that are close in size but often in arbitrary shapes.  We can roughly read out which components are most important to the index: turns out to be "owner's equivalent rent" by a mile.  Owner's equivalent rent, as discussed by Leonhardt, is the most problematic and inaccurate component, and also, I might add, most susceptible to manipulation since it is an estimate, not a measure.  The next biggest pieces -- food and gasoline (excepting rent) -- are taken out because of "volatility".

It would also be helpful to label which components are taken out of the Bernanke calculation that claims only a 4% inflation when my cable company seems to have raised prices every six months, and groceries and meals and so on are rising at 10-20%.  (Of course, Leonhardt thinks this is all loss aversion.)

Reference: "Seeing Inflation Only in the Prices That Go Up", New York Times, May 7 2008.

The colors are appropriate if the reference is the official inflation rate, which I think (I'm Australian so I don't follow this closely) for the US is about 4%.

Hmmm, a piece of art to figure out all these surfaces. I actually like it. In a mundane business presentation, this would probably a scatter (% of budget, price change on the axis, the same color for dots in the same category), losing some of the information that is in here.

I agree with Ken; the reference here isn't and shouldn't be zero, it should be some narrow band around the overall inflation rate, which it appears to be. Then blue items are those which tend to bring the inflation rate down, and red which bring them up.

The arbitrary shapes that these treemaps create is a problem *if* the information you are trying to convey is the exact relative sizes of the individual items; but that's not the case here, you're trying to show how they build a whole and if their relative ranking comes across only crudely, that's probably ok.

I am not a fan of these treemaps. Aside from some clumping, the shape and position of the data is arbitrary; a waste, I think, of scarce dimensions. Then too we have to move the mouse over each area to to reveal-- one tiny bit at a time-- the data.

All of this reminds me of a Unix dungeon exploring game I played during my misspent youth. To gather the clues, players had to discover and then visit each room in the maze.

I don't think a puzzle is a sound metaphor for information graphics.

It would help if the NY Times provided tables of the data in addition to the graphics.

A quick check online shows that the rate of inflation in March 2008 was 3.98%. So what's your objection, as a "more sophisticated numerate", to using one set of colors above 4% and another set of colors below that?

The fallacy in your argument is that the key must be colored relative to zero, not relative to the subject of the chart.

Ken and J and others: good observation that the red/blue divide was based on the estimated 4% aggregate inflation rate.

The data in the NYT chart is the full CPI not the "core" CPI, so it does include all the volatile elements such as food.

The Fed, like central banks around the world, like to use modified CPI series which attempt to strip out volatile but (hopefully) mean-reverting components. The reason for this is not because they don't think that food prices affect people, but because monetary policy is a blunt tool and they want to avoid reacting to CPI movements (up or down) which are likely to soon reverse of their own accord. Of course, they will also monitor the full CPI as well in case any of the stripped out components start exhibiting a persistent trend.

So, while the 4% inflation figure in the chart may not accord with everyone's experience, it is simply an average figure and is not the result of stripping anything out.

I meant to say the 4% figure for cable does not have anything stripped out.