Jerome C., a reader and blogger, wrote up a wonderful piece on different ways to publish charts on the web.  Highly, highly recommended.

One of the points he made was that images (jpegs, gifs, etc.) are often published with poor quality.  I feel the pain.  Ever since Typepad switched to its new and "improved" editor, this blog has been suffering from low-quality thumbnails.  I know, I know... I need to move to Wordpress.  But from a 15-minute online research effort, I realized that moving a blog with lots of images is rather impossible!  All of the images would have to be uploaded, and a lot of links would need to be fixed.  Maybe the next time I am on holiday, I will get around to it. 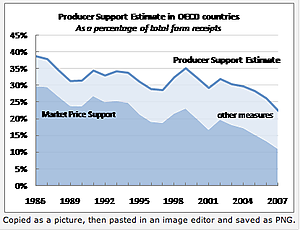 Take a look at his comparisons of four ways to forklift an Excel chart onto a blog.  (The image on the right showed one of the four ways.) The difference in image sharpness is marked.

Resizing Excel charts is a common source of headache.  Always right-size the chart inside Excel before exporting!

I also share Jerome's point of view on these on-line graphics creators.  Good idea, wishing for more.  In his words:

to make a point, you absolutely need to be able to control every aspect of your graph, even if its form remains familiar: combine series, group or highlight some datapoints, format axis, and so on.

I would like to explore the other options he cited, such as Processing.

Jerome's blog has a promising beginning.  The following chart is both informative and beautifully crafted.  It brings out the clear message that OECD countries have done admirably well in life expectancy, and particularly impressive in reducing the variance among member countries by lifting the expected age of the worse-off, relative to the better-off, with most of the gain happening during the 1980s.  (Adding quartiles may also be meaningful.  And I prefer to put the labels outside the plot area.)  The graph does not explain what caused the shift in the 1980s but this is a great starting point for the curious. 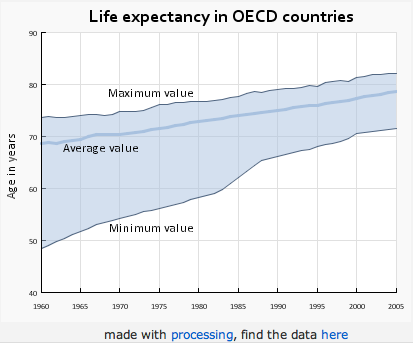 you can store your images on Amazon S3 quite easily.

Good if bandwidth is an issue, but even better is the technique of directing the subdomain. THis way if you need to move images, you can do it by changing a single setting!

You'll still get pain on your first migration though :((

"Resizing Excel charts is a common source of headache. Always right-size the chart inside Excel before exporting!"

Yes! True before exporting anywhere. Sometimes if you are using Word or PowerPoint, you can get away with resizing a bit, but only with constant aspect ratio, and with changes of no more than 25% either way.

I have a free Excel add-in which can be downloaded from my blog entry Enhanced Export Chart Procedure. It adds an Export Chart item to the Chart menu, and exports the chart in PNG (default), GIF, JPG (not recommended) and perhaps other formats, depending upon which graphic filters are loaded. I then FTP the images to my blog's image folder.

The life expectancy plot is nice, but it does require us to compare two curves to get the findings you describe. This is a difficult perceptual task as the visual system tends to look at the smallest distance between the curves, when mathematically we want the vertical distance.

Some search and replaces wouldn't make it too painful to move over to Wordpress. Let me know if you need a hand, I enjoy reading your blog!

Martin, I think you mistyped, and meant that the range has been reduced, and not the variance. As you know, although in general variance is reduced when range is reduced, it is not always the case, and this chart does not show variance, but range.

It is true in this case, however, that that standard deviation decreases dramatically over time. A robust estimate of the variation, the inter-quartile range (IQR), doesn't have the same dramatic trend as the standard deviation; interestingly, it is much less smooth, probably because statistics are not available for every year for many countries (the sample size varies from as little as 17 to the maximum of 30).

The reduction in range is largely driven by outliers: Turkey, Mexico prior to 1989, and Hungary 1989 and later (which actually declined for several years starting in 1989, at the end of the Communist era).

Turkey's sudden increase starting in 1983 seems to be at the same time that the economy was modernized and liberalized.

Martin's suggestion to include quantiles would make this obvious, as the mean is actually less than the 1st quartile for most of 1960 to 1972!

In my blog entry Life expectancy, I show that Rachel Cunliffe is correct that the quartiles show that the variance has increased even though the range has reduced.

It's actually DavidS's post on variance that I explored here.