Yesterday's post focused on the purely graphical aspects of NYT's very rich graphic on CEO compensation.  Today, we take a look at the data being plotted.  Aleks already jumped the gun, pointing out one deficiency of the stock price metric.

This graphic violates Godin's (Golden?) Rule #1, Only One Message, with which we generally agree.  In trying to accommodate both comparisons, it managed to confuse readers.  In particular, as pointed out yesterday, the primary comparison of compensation against stock price is hard to discern as the scale was determined by the second comparison (between companies).

The issue Aleks pointed out is that some CEOs are paid by stock; thus, their compensation would rise and ebb as the stock price rises and ebbs.  The correlation would then indicate the structure of the pay package, rather than the (presumed) pay for performance.

Stock price, in fact, is a poor indicator of company performance, especially short-term price changes such as the one-year changes used here.  Further, we have a problem of mismatched timing: pay (excluding the stock component) moves much much more slowly than stock prices; besides, while stock prices experience positive and negative changes, pay changes are skewed positive!  All these make direct comparison of these two metrics ill-advised.

If shareholder value is still the desired metric, then one should use a longer time-series.  This will crowd out the comparison with similarly sized companies but make the graphic more useful.

One final curiosity: according to this data set, Steve Jobs did charity work for Apple during that year; he received no stock or option grants and a nominal $1 salary.  Is this real? 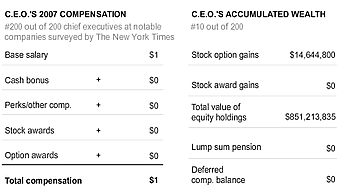 I have heard that Steve Jobs has had a salary of $1 for a number of years. I wouldn't call it charity work though with stock options, a personal jet and a heap of other stuff - he is not slumming it.

There are a fair number of CEO's and execs who have a relatively low "salary" to avoid paying maxed out income taxes.

Once you get stock options, you keep them. It's the number of shares you own that matters.

In other words, he owns 958 million worth of Apple based on today's valuation, while they'd be worth about 465 million in the beginning of 07. One can calculate the actual compensation from this.

Any metric, once in eye of the public, will be PR-managed. Steve Jobs knows this because he was dragged around the newspapers a while ago because of his compensation: "Steve Jobs' recent $872 million options grant." These options last for a while, and he's already taken many of them out of the company. Essentially, because he was paid for his work upfront, year-by-year compensation doesn't really matter, especially when the stock price doubles during a single year.

Remember that Seth Godin's laws are for charts that will be on screen for only 30 seconds in front of a nontechnical audience. A stand up presentation is no place for a detailed graphic, but in a newspaper or magazine, it is available for as long as it holds the reader's interest.

Jon: there is a difference for sure between flip charts and something in the paper. I'd argue that for most people, there is a five-minute cap before they lose interest in any chart so there is a limit to the amount of complexity.