It's raining colors here too

Via the Data Mining blog, I came across ChoiceRanker, which is some kind of straw polling site that uses the following visualization of the data. 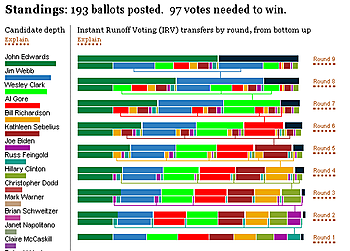 This particular chart is related to the question of who should be Obama's VP.  I can't say I understand what's going on here.  If you can figure it out, let us know.

Round 1 has votes for all candidates. Then at each round they eliminate the least popular and the lower row for each round shows how their votes are divided.

Proponents of IRV say it's a better system than plurality voting because it's better for third parties. Say it's 2000 and you support Ralph Nader. With IRV you can vote for Nader and not be afraid you'll throw the election to Bush. That is, you don't have to vote for Gore for fear that not enough other people will vote for Nader.

Sure this chart has a lot going on, but it would convey a lot of information to someone who understands the system. I don't, however, think it's the best advertisement for IRV.

There is a video that explains it, but nevertheless, if you know in advance what Instant Runoff Voting is you can guess it.

As Ken has said, the bottom graph shows the distribution of the first preference votes. If nobody has 50 percent of the vote, the candidate with the least votes is eliminated, and the second preferences of his or her voters are counted. In the round 2 graph, you have, then, in the upper part, the votes for the remaining candidates after adding 2nd preferences, and in the lower part, the composition, in terms of votes of the previous round, of those votes.

You do the same thing again as long as no one has got 50 percent. Each round, you eliminate the candidate with the least votes (which include 1st, 2nd, 3rd preferences...), and add its voters to the next preference (2nd, 3rd... whatever).

The black bar in the right accumulates the non-votes of voter who voted only for a few candidates (you are not obliged to rank all of them) and all their choices are eliminated. In this case it is big, because of the number of candidates. In real life it would probably be much smaller.

You stop the process when one candidate has more than 50 percent of all votes (round 9), or when you have only two candidates left (round 8), which produces the same result. Again, in a real election these two things happen at the same time, but here, because of many non-votes, they happen at different rounds.

Except for the glaring colors, I had no problem with this chart. Of course, I'm familiar with IRV, since we used it for elections in college.

This note is from Craig Simon. I created the site you're talking about.

FYI, I call the main graph you're talking about an "Irving Chart." It's good to know that folks who understand IRV were able to figure it out.

For newcomers, there is a 2 minute video that explains how things go. I'm confident that most people can understand it, because my mother (who is not particularly computer savvy) got the main idea in less than a minute. For more sophisticated observers, there are tooltip pop ups that convey lots more information (Labeling got way too busy).

The bar charts on the left side -- I call them "depth" charts -- show a modified Borda count. These work much like college football rankings, but are more heavily weighted to a voter's 1st place vote. The depth results are used to break any ties during the IRV rounds.

Also, no one actually "wins" till they get 50% of the total votes cast. That's why it may appear as if there's an extra round after it gets down to just two candidates. That final distribution provides a better sense of whether the winning candidate is acceptable to everyone.

Also, I'm not seeking to promote IRV; it's a means to end. The goal is to create a system that can help diverse communities reach a consensus.

The video on their website actually does a good job of explaining it. It this chart didn't have any labels, I would have thought it was an application for gene sequencing.