Professor Gelman generally believes the red state, blue state paradigm is too simplistic to describe the American electorate.  He has been sharing some of his work on his blog, and has just published a book about this topic.  Recently he produced the following chart, which is gimmick-looking but crystal clear in its message. 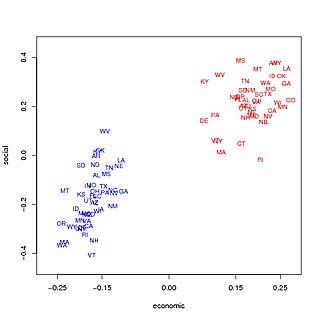 Here, economic and social ideology are plotted on a scatter chart, with positive values indicating conservatism and negative values liberalism.  Further, each state is represented twice on the chart, the red point for the Republicans and the blue for Democrats within the state.

This is a cluster analyst's dream data set.  The absolute separation of the Republican cluster and the Democrat cluster is astounding: imagine a diagonal line perfectly classifying all points.

We should not miss a host of details:

Reference: Gelman, "Ranking states by conservatism/liberalism of their voters", June 30 2008.

Notable also is that, within Democrats, there seems to be a moderate correlation between social scores and economic scores.

- Although the range for the social scale is larger, it has been re-scaled (see http://www.stat.columbia.edu/~cook/
movabletype/archives/2008/07/more_info_on_th.html
). Assuming that the re-scaling is related to the variability (which it usually is), then we might infer that there is more relative variability in the social scale (which, in fact, is obvious from the plot), but it says nothing about the range. FWIW, the social score is calculated from 13 questions, and the economic score from 10.

Pretty graph, but the process used to collect the data is completely unclear and not reproducible.
Would be great to get the details here, otherwise it looks a bit like the self fulfilling prophecies - which is still good academic practice ...

DavidS: thanks for the additional comments. You're right about the 45-deg line; I even pointed out that the two scales were not the same so it's any positive slope line

Martin: if you follow the link in DavidS's post, you will see a fuller explanation of how the ratings were derived (from survey data)

thanks for pointing to David's link - that explains a bit more, but does not really make me more comfortable with the data.
The way the survey was constructed and conducted may influence the results extremely - at least it has a good leverage on how strongly you may separate the two clusters.

You're using averages though, and that has a clustering effect which gives the impression that there are NO voters that fall in the middle (of which there are many). It would be interesting to somehow rate the people that voted democrats in one elections and then republican in the next (or vice versa). THAT would tell you something.

I recently did some analysis of the General Social Survey. There is a set of the GSS that splits into two very well-defined clusters as well. See my demonstration here: http://orbitalteapot.blogspot.com/2008/05/best-basis-some-gss-exploration.html