Oftentimes, picking the right scale for a chart makes all the difference.  The following chart showed up in the New York Times Magazine some time ago.  Readers will immediately recognize this as "infotainment" rather than a serious attempt to convey the data. 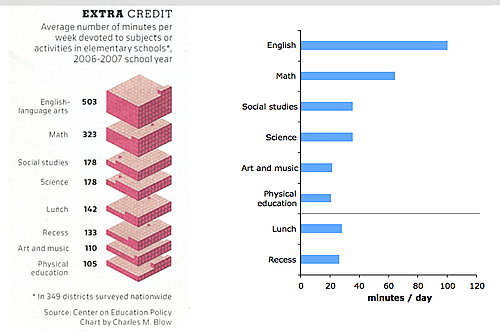 The data came from a study by the Center on Education Policy which counted the amount of instruction time spent on various subjects at a sample of elementary schools in the U.S.

A simple bar chart would make a nice graphic, as shown on the right.  Instead of sorting by decreasing minutes, we pulled out "lunch" and "recess" since they belong to a separate category.

This is a small example of a larger problem with using averages.  The media loves to give out statistics like six people are dying of diabetes every minute (e.g. here).  This is typically done by dividing the total number of diabetes-related deaths in a year by the number of minutes in a year.   Why divide by total number of minutes in a year?  The fallacy of such a calculation is evident if one applies this logic to natural deaths (since we all have to die some day).  As the world population grows, there will just be more and more people dying every minute!


Choosing the appropriate reference point -- just like picking the right scale -- is the beginning of any good analysis.

Good post, as usual! While I understand separating lunch and recess, presumably part of the reason that they would be included in the main group is to highlight the fact that more time is spent on lunch than music. I would suggest that the decreasing order be maintained but that lunch are recess are given a different colour to separate them visually from the other bars.

Actually, that left chart is a really nice extension of the square pie chart/waffle chart into 3D. I think it shows the differences quite nicely, and is certainly visually a lot more appealing than a boring old bar chart.

I agree about the comparison, though I guess they asked about the times per week in their survey (kids will hardly spend the exact same amount of time on each subject or activity every day).

The numbers also seem flawed: they only account for a little over one day per week. What do they do they do with the remaining 8408 minutes/140 hours? Perhaps they should invest some of that in more relaxed lunches ...

The totals look ok to me: around 28 hours per week or 5.5 hours per day. Given that these figures only cover the school day (so travel, sleep, etc are not included) they are at least the right order of magnitude. There could be some lesser activities not included and I'm not sure how long the typical school day is in the US.

P.S. Is there any means of contacting the author with ideas other than posting comments?

Sean: Not sure if you are wanting to talk to me or the author of the NYT article. If it's me, then the answer is yes. Click on the About this blog link to find my email address. Lots of readers have sent in suggestions. The only problem is for me to keep up!

Also, using a different color for lunch & recess is definitely an attractive option.

Robert: I thought about the total hours and came to the same conclusion as Sean. Seemed like it made sense. I'm not a big fan of square pie charts/ waffle charts. I'd be happy to use a dot chart in this case.

I think the original chart is better than the bar graph. However, a pie chart would have worked best here. Only because you can visually see each category against one another as a percentage of the entire circle. But that's just my opinion.

The first graph is very misleading. The pictures are the wrong size and very distracting. Lunch and recess should be seperated bcause they are not classes and the scale should be shortened. I would have gone with a pie chart in-order to convey the information. A pie chart would have given a clearer indication of the differnce in time spent in each subject.