The holiday weekend permitted me to browse through stacks of unread magazines, and collect more examples of charts out there in the media.  The following chart managed to turn a series of six numbers into a brain-teaser!

The title "Consumer confidence in a strong US economy" reminded us of the consumer confidence index often cited by the media, except that indices are seldom expressed in terms of percentages.  Further, the use of pies hinted at proportions rather than indices.  The string of data labels above the pies added mystery, especially those red and green (down and up) arrows written next to percentages, indicating growth rates.  Indices, proportions, growth rates: talk about mixed metaphors! 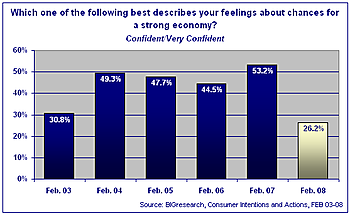 Some investigation was in order.  The original press release from BIGresearch provided the solution. Helpfully it even came with a graph (shown left).  It's your typical Excel bar chart with most of the default options plus some shadowy coloring.
DM News managed to turn this pedestrian chart into the series of pies, which looked nicer but was confusing.  Here, we found that the data were proportions, specifically proportions of responders in annual polls who expressed confidence or high confidence in the chance of a strong US economy.  The key message concerned the sharp drop in proportion from 2007 to 2008. 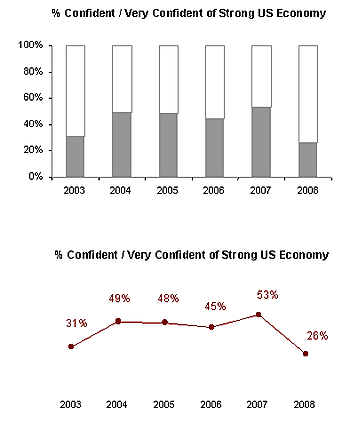