Joran E. pointed to this "icky" chart he found on Clive Crooks' blog at the Atlantic. 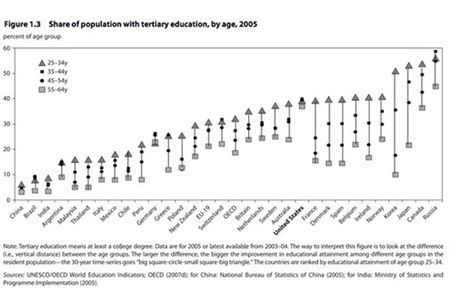 He ordered a "junkchart treatment", so here it comes.

First we wanted to process the triangles, dots and squares to make sense of this data.  We noted that the data came from a single year (2005) so the chart did not trace the development of the education sector over time.  But wait, it used a different route to get at the same idea.  The author compared different generations within each country to see if more and more citizens took university degrees.  So each vertical "arrow" was kind of a historical record of different generations within a country.  Under this criterion, Korea and Japan had come a long way while the US and China stagnated.

The chart is quite impossible to read as designed.  There is little reason to sort by 25-34-year-old proportion when the message concerns improvement over generations.  Besides, what about countries that apparently retrogressed?  (like Russia and Germany) 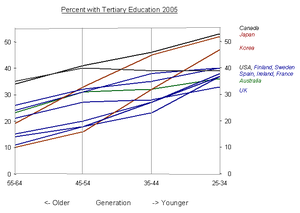 For this data, I returned to my favored bumps chart.  Here is version one.  There are two ways to read this chart: across countries, we note that most of the European states (blue) had similar profiles showing roughly a constant rate of growth.  The Asian duo of Japan and Korea (brown) had the most marked growth.  Of North America (black), Canada diverged from the US since the 35-44 generation.

Alternatively, we can focus on the change generation-over-generation.  From 55-64 to 45-54, almost all countries in this sample (except Japan) grew at the same rate.  Then between 45-54 and 35-44, the two Asian countries clearly set the pace.  The generation between 35-44 and 25-34 is most interesting: Korea has not slowed, Japan has slowed a little but still grew as fast as Canada.  A trio of European countries (Spain, Ireland, France) outpaced their neighbors.

Below I show version two.  This one combines bumps chart with small multiples.  North America, Europe and Asia/Australia are now in separate charts.  This removes clutter. 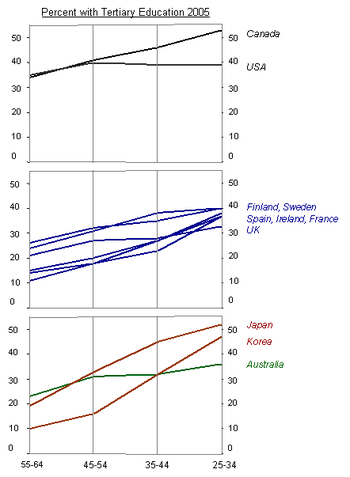 Amusingly, I see that the one actual bumps chart I can remember you discussing recently, The Tour de France graph of cyclist placement against tournament stage, is not currently placed in the "Bumps chart" category. Lots of line charts are, though :-)

I wonder why leave out Germany from the multiples? It actually behaves like the US.

Also, are the labels at the end of the Europe multiple really as they seem I.E: is the UK the country that flattens (ä la US)?

Would the original chart be a lot better if the countries were sorted in order of increasing generational gap?
So, US & China, Germany on left and Japan Korea on right.
How about colouring according to average cost to student of a tertiary education for the young group?

I don't care if you call this a bumps chart or a parallel coordinates chart, or a line chart. The junkcharts version is a great improvement over the original. My question is, Why did you place Australia on the chart with Japan and Korea, instead of with the European countries? Is it because of geography? If you put Australia with the European countries, then the three charts seem to illustrate three classes of behavior. Japan and Korea start in the middle or bottom and go to thee top, US and Canada start near the top, with Canada extending to the top, while the US hits a plateau. The European countries and Australia start around the bottom to middle and increase to end around the bottom to middle.

All: this surprisingly is a difficult data set to find so there is no wisdom in my choice of countries, only availability of the data.

Jon: Australia was like a sore thumb; there isn't a great place to put it.

Derek: I'm cool with your rant about ordinal data. For me, I can't get excited about rigid definitions. We discretize continuous data all the time (e.g. histograms) so it's equally fine to interpolate discrete data so long as it makes the data speak louder.

Great memory by the way about the old posts. There are still a number of old posts that haven't been re-classified for the tag cloud yet.

I agree that Kaiser's alternative is indeed much superior - the original chart is very difficult to read.

The 'small multiples' strategy used in version two is - to my mind - essential. Trying to put all of the countries into the same chart makes it very difficult to visually follow any of the trends.

A couple of constructive suggestions to further improve the small multiples version.
The chart for the European countries is still too hard to follow. I'd suggest three things:
* First, use color coding to help visually separate the lines.
* Second, reverse the order of the x-axis. This is, imho, a more natural ordering (from low to high) and has the additional benefit that the points are better spread for the oldest population, which makes labeling easier.
* Third, I'd get rid of the redundant Y-axis on the right. I don't think this adds much clarity and makes labeling more difficult.

Btw, I think the data set can be found here:
www.uis.unesco.org/template/publications/wei2006/Chap1_Tables.xls (1.a.w worksheet)

This is a rare case in which I liked the original chart better than the suggested alternatives. I did not find the original chart difficult to read and it conveyed the intended information to me. I even like the sort order. My eye grasps that China and the US have both "stagnated", but education attainment percentages in the two countries are very different.

While I remain unimpressed by the original chart, I agree with Keith that it does a good job of visualy communicating which countries have moved significantly.

The arbitrary mapping of big square, little circle, little square and big triangle to the age segments is really not intuitive. And the data's sense of direction suffers until you've looked at the data and the legend long enough to know that little circle is older than small square but younger than big square, etc.

One simple alternative that blends some of the best features of each approach could be something like this:

This is one case where I quite liked the original and find the Junk Charts version to be much less readable (and it doesn't convey all of the data). The original did well in expressing a lot of data in a compact way.
zuil serip's version (follow the link above to the Flickr page) achieves the best of both worlds, I think. But it would be good to see how it would work if extended to include all of the countries also.

For those who liked the original, I wonder if you'd like it if you didn't already know that the vertical distance is what it is about. When I first saw the chart, it took a while to figure out what it meant. The annotation didn't provide any hint.

A big (fatal) disadvantage of the original is when the age groups go out of sequence. In the case of Russia, it is very difficult to figure out the progress versus retrogress while in the Bumps presentation, this presents no trouble at all.

The side-by-side presentation of Zuil is commendable.

MainSequences: as I said before in the comments, I didn't plot all the countries because I couldn't find the data. It's not a restriction of the chart type.

Zuil Serip captured it best with his second effort, the panel chart. This could easily be expanded to include all countries.