I find it embarrassing for the Economist to print an article like this one.  (Do they have a statistics editor?) 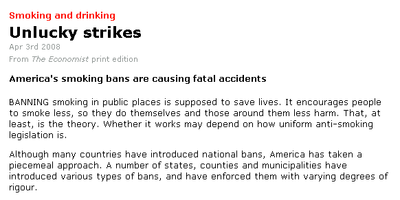 The subtitle asserting "causality" is offensive.  It is alleged that smoking bans in bars have "caused" more road accidents because people are forced to drive longer distances to find those bars that still allow smoking.

To assert causality so starkly for an undesigned observational study is unprofessional.  I doubt that the authors of the study they cited even went so far.  At best, they probably found a correlation.

Another problem is the practical significance of the finding.  There is a 13% increase in fatal accident rate in a "typical county containing 680,000 people".  There are two problems with this statement:

It appears that the paper is locked up in pre-publication.  If you have seen it, let us know if the authors actually asserted causality.

Why is it that journalists show a healthy degree of skepticism about what the government says, but never seem to question claims that are published in scientific journals?

Hey, Kaiser. Didn't you get the memo? It's "unintended consequences"! Anything that's supposed to save lives will kill people--it's the iron law of unintended consequences. Conversely, anything that sounds dangerous will actually save lives. At some point the government will realize this and start simply requiring people to smoke. (Of course, that will only work if it's not intended to work. It's like that "reverse psychology" thing that they used to talk about when we were kids.)

"Using geographic variation in local and state smoke-free bar laws in the US, we observe an increase in fatal accidents involving alcohol following bans on smoking in bars that is not observed in places without bans. Although an increased accident risk might seem surprising at first, two strands of literature on consumer behavior suggest potential explanations—smokers driving longer distances to a bordering jurisdiction that allows smoking in bars and smokers driving longer distances within their jurisdiction to bars that still allow smoking, perhaps through non-compliance or outdoor seating. We find evidence consistent with both explanations. The increased miles driven by drivers wishing to smoke and drink offsets any reduction in driving from smokers choosing to stay home following a ban, resulting in increased alcohol-related accidents. This result proves durable, as we subject it to an extensive battery of robustness checks."

Then there is the perverse argument that by dying prematurely in a crash, this still has the effect of reducing smoking-related deaths and the associated public health costs of an expensive chronic-disease-related death.

Interesting analysis. The distance of the bar can really increase the possibility of having an accident when trying to find a bar which allows smoking. Now, I'm torn between drinking while smoking and drinking without smoking. Because one of the two has a higher risk of getting into an accident.