This map from the Economist illustrates pretty well the movement of population from middle America outwards from 2000-6.  The message reaches us despite the large volume of data painted.  (The gray shadow though was more than a little distracting.) 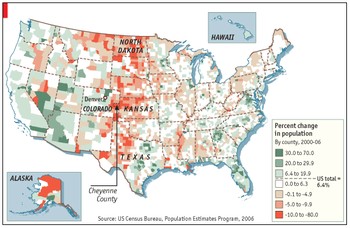 The map piqued my curiosity in two areas:

How did they determine the color scale?  The average change over all counties (6.4%) was obviously used.  Standard deviation was not since the ranges of change were unequal in size.

PS. I am traveling and so posting will be limited.

A map very similar to this and many others besides are published in the Census Atlas of the United States, worth a look for some beautiful examples of design:
http://www.census.gov/population/www/cen2000/censusatlas/

I agree that the Census Bureau produces some beautiful graphics. On the other hand, what do you make of the following: