In this NYT article, we are told that "the most likely result when a policeman discharges a gun is that he or she will miss the target completely."  That's a shocker for those of us conditioned by Hollywood movies to think anyone who picks up a gun for the first time hits the villain right on the temple.  The following graphic attempts to tell the story. 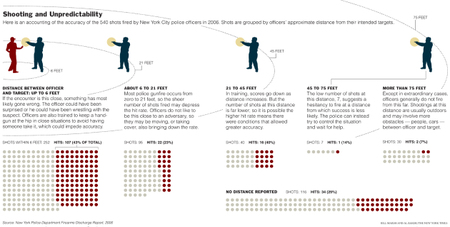 The one hit here is how the distances are visually presented.  The elliptical lines remind us of the neglected variable of direction; it also means the scale is correct only along one direction.

The dot matrix construct highlights the absolute numbers of shots, hits and misses but barely addresses the key issue of hit rates (accuracy).

Specifically, this data set was presumably collected to explore the relationship between hit rates and distances from the target.  The use of different widths clouds our judgement of proportions.  To wit, it is not obvious that the 10-wide block and the 40-wide block shown left depict roughly equal hit rates (23%, 29%). 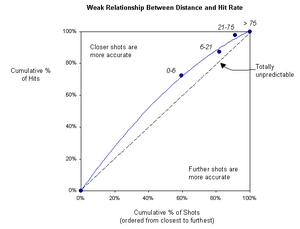 The junkart version adopts a different approach.  This is the Lorenz curve, often used to show income inequality (see also here and here).  Here, the shots were ordered from closest to furthest from target, then summed up by distance segments.  For example, shots from 0 to 6 feet accounted for 60% of all shots but 72% of all hits.

If distance does not affect hit rates, we'd expect 60% of all shots to result in 60% of all hits.  This data point would show up on the 45-degree diagonal on the chart, labelled "totally unpredictable".  Any data appearing above the diagonal indicates that closer shots are more accurate, accounting for more than their fair share of hits.

Comparing the fitted blue line and the diagonal, one sees that distance is a weak predictor of hit rate.  The police commissioner explains this in the article; many other variables also affect accuracy, including "the adrenaline flow, the movement of the target, the movement of the shooter, the officer, the lighting conditions, the weather..."

Note that the shots with "unknown" distances were removed from the analysis.  Also, the categories of 21-45 and 45-above were combined: the rates were similar and with only three hits, it does not make sense to treat these as separate categories.

Of course, this version would not work well in the mass media.  For that, one can just plot hit rates against the distance categories.

Or for something more technical, include 95% confidence intervals (assuming the shots are independent, which they are presumably not)

I know one ex-policeman who made the mistake of firing two warning shots from a revolver. Then made 2 hits out of 4, which with a low powered weapon was luckily just enough, as he needed to reload. Only in the movies does someone get shot deliberately in the hand, shoulder or leg, in real life it is a near-miss.

I'm thinking that even for use beyond Mass Media, that a histogram of hit rate vs distance category might be best. At least unless there were much more data to support the Lorenz curve.

Jon: the histogram will answer the question too; since the data arrives aggregated into five buckets, it has the same issue of not enough data to characterize the curve. Further, it will show that the relationship is not linear, with possibly a steep drop beyond some distance.