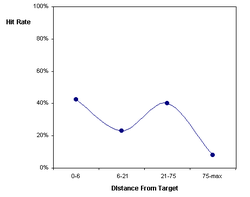 With 95% confidence intervals (these assume that shots are independent, maybe not correct but should be conservative)

The increase from 6-21 to 21-45 may just be statistical variation. I expect though that at shorter distances there is a need to fire rapidly which reduces accuracy. At 21-45 there is time to aim and stabilise so accuracy improves.

I don't think you can trust any analysis of this data because its nature makes it wildly inaccurate. Just like shooting someone in such a situation involves a lot of stress and lack of precision, I doubt that even a rough estimate of the distance from which the shot was fired can be made with any accuracy. Police reports are written hours after the incident, when many other details were much more important than the exact distance from which each shot was fired. Besides, estimating distance is not something we are particularly good at, even under good conditions. Also, the rather large number of shots where the distance is completely unknown needs to be factored into this.

So based on that, I don't think anything other than the overall hit rate from all the shots fired makes much sense to analyze. The chart makes the data look more interesting, but I wonder if it would have made more sense to compare to some other data rather than go into detail based on such bad data - perhaps the number of arrests, or the number of shots fired over the year (are there more incidents around the holidays, etc.).

"Gelman and Nolan didn't just find any best fitting line through the data. They started out with a trigonometric model..."

Excellent. A physically-based model is by nature simpler and more accurate than any sixth order polynomial fit. You can tell the statistics newbies by their reliance on such awkward fits.