Mike K submitted this great entry months ago.  It's a map depicting stock market correction across the globe during the summer.  You have to click on the link to the WSJ website in order to see the interactive element. 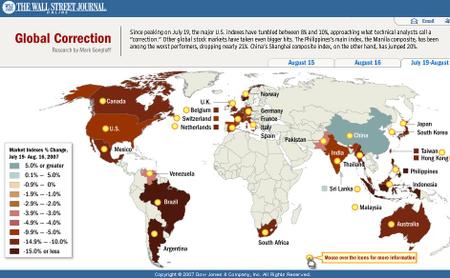 Here are Mike's comments and mine:

Why it's bad:
First, to see the detail you have to click on the countries one by one. Hard to do a comparison of two countries. This makes it close to FlashJunk.

The color scheme is supposed to help but:

Second, the colors are too close together to allow easy comparisons of, say, Canada and Australia.

In addition, the binning of the colors is uneven and oddly chosen.  In the middle of the scale, each color shift represents 1% but at the edge, it is 5%, or more.

Third, area of these countries, or their geographic location, isn't really that relevant. Market cap might be. Then tiny-but-richly-capitalistic Netherlands wouldn't have to be shown in the middle of the Atlantic, as if the dikes had all burst and Amsterdam had floated out to sea.

Indeed, it begs the question: what were the gold dots suppose to signify? (Hint: it's not location.)

Fourth, why the selectivity? There's stock markets in Turkey, and in Russia, and in Ireland and in Thailand. (Oh, wait, they show the one in Thailand -- except they put it in Myanmar instead.)

In the junkart version, I want to test the hypothesis of a global contagion so I plot the data in order of closing times of individual stock markets.  (I just guessed the closing times based on the map.)  Not much here though. 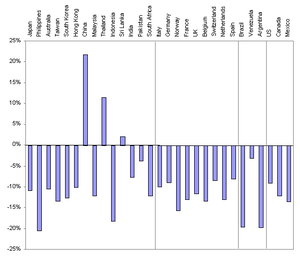 What a dreadfully junk-rich info-poor presentation. Just think if they'd plotted the twenty nine or so stock market positions as a panel of sparklines against Greenwich Mean Time instead. If there was a pattern there, you'd expect to see them go down one by one.

I hate to nitpick, but given the purpose of this blog, it seems appropriate: the chart raises the question: what do the gold dots represent? In order to beg a question, the chart would need to be making a circular argument.

No name: It may feel like this blog is all nitpicking but I try hard to mix in some examples of good charts. Most of the reader submissions are about chartjunk and since there is so much of those out there, it's not surprising. So here is my appeal for readers to send in exemplary charts once in a while!