As many of you realize, this blog owes a lot to the New York Times.  The Times is unique in its willingness to print interesting, sophisticated graphics.  Via the Social Science Statistics blog, I found out that Matthew Ericson is a deputy graphics editor, and he recently gave a gigantic presentation at the IEEE InfoVis conference. (You can download the entire document from his website.) 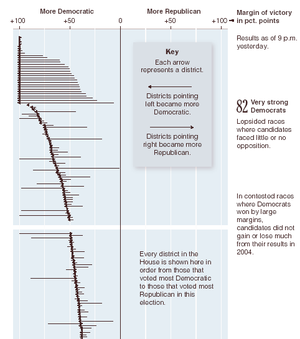 As the SSS blog pointed out, the section on how they decided to visualize the shift in party margins by House districts, specifically to declare scatter plots as too "difficult for the masses", is fascinating.  It illustrates the idea of sketching that I have advocated here in the past. (The PDF of the complete graphic can be downloaded from here.)

From my point of view, the issue is less the type of chart than the level of aggregation.  The chart has a very appealing data-to-ink ratio (a la Tufte) but could less be more?  One of the secrets of making a good chart, and any data analysis for that matter, is to reduce complexity.  For example, is it crucial for every single district to receive equal treatment?  (Similarly, if scatter plots were chosen, is it crucial to include every district?)

Several examples of great charts can be found in Matt's presentation.  On slide 83, I admire the Bonds/Aaron/Ruth chart.  The inset showing the acceleration of Bonds from age 35 to 39, as compared to the decline of Aaron and Ruth during the same age span, is powerful.  Similarly, the effective use of foreground (blue) and background (gray) in comparing ARod, Pujols and Griffey against the big 3 is masterly (see right).

There is also a sequence on mapping the San Diego wildfires (slides 2-10), showing how they gathered population data to complement fire data, thus adding context to the threat to highly populated regions.

On a different vein, the SSS blog, written by the people at Harvard's Institute for Quantitative Social Sciences, has written a number of engaging posts on data graphics recently.  Take a note at Visualizing Electoral Data, which coincidentally addresses a similar issue as the NYT party vote share graphic discussed above.

This graphic plots the degree of party swings by UK parliamentary constituency.  The darker the color, the tighter the stranglehold by one party.  Going from top to bottom, the authors show party swings over successive elections.  The swing constituencies are therefore near the middle of the chart.

The UK parliamentary graphic works well for the period covered but as of the 2005 election the third party holds about 10% of the constituencies. Is this too large a chunk to ignore? How would the graphic be re-worked for three parties?