[I'm back from vacation.  Will provide my reaction to the responses to the Gelman challenge, and for those who have sent me email, I will work through them soon.] 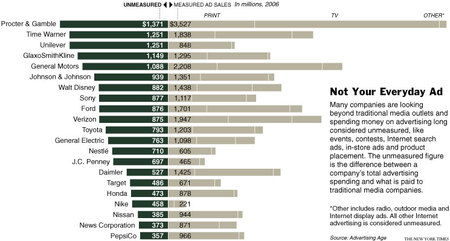 This construct is akin to a population pyramid; it's great for comparing two groups along one metric, say age groups between males and females.  Here, the two halves aren't comparable groups but two different metrics.  The main metric, that is, the proportion of unmeasured, is not directly depicted: the reader must figure out mentally how much of each bar the black part covers.  Also, the companies are sorted by unmeasured media spending but this leaves the measured spending with a jagged profile, confusing matters.

As for the little white slits on the gray bars, they are admittedly cute but it is difficult to compare the detailed breakdown between print, TV and other media among companies. 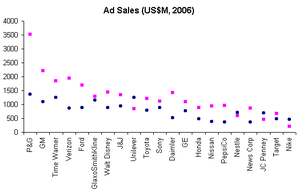 (Pink dots are measured, blue unmeasured.) It's not a very interesting graphic though. The sense of proportion is still missing.

I settled on a scatter plot which relates the proportion spent on unmeasured to the total amount of spending.  It appears that the largest advertisers had the lowest proportional unmeasured spend while the smallest (among the majors) had the highest.  (It's only a weak correlation: a linear fit yields only 16% R-squared.) 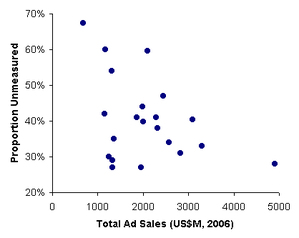 Probably there are circumstances where you can use this type of chart, but not in this case.

I think the scatter chart is best. I had hoped for some nice insights from my favourite scatter chart trick, the grid of diagonal lines, but nothing much appears to jump out.

It appears that the largest advertisers had the lowest proportional unmeasured spend while the smallest (among the majors) had the highest. (It's only a weak correlation: a linear fit yields only 16% R-squared.)

If instead you hypothesise that big advertisers spend a quarter as much on unmeasured media as on measured media, plus another half billion or so, the R^2 is 43%. y=0.254x+480 [chart]

The half billion accounts for the increase in proportion among smaller advertisers. I don't say 43% is good, only that it's an indication of how comparatively weak an inverse linear relation between total ad spend and percentage unmeasured media is.

Although the scatter plot is better for analytical purposes I think that it would be above the heads of 99% of NYT readers. I guess this kind of consideration really limits the kind of visualization that could be considered.