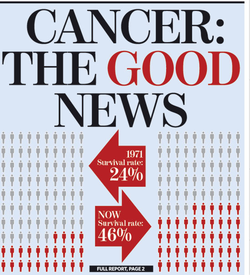 This graphic appeared on the front page of the British paper, the Independent.  I find it to be effective, although defiantly not efficient a la Tufte: the data-to-ink ratio is abysmal.  Two data points on the entire page, with both data labels drawn in extra large font!

It can be improved if the 24 guys are given a different color so we can see the amount of improvement between 1971 and "NOW".

Some may complain that the use of percentages obscured population growth during this period.  Perhaps there should be fewer men on the left than on the right.  Unfortunately, that would in turn obscure the comparison of percentages.

An alternative construct is a time series chart showing the increase in survival rate over time.  It would plot more data and depict a trend (or lack thereof).  I'd have to agree with the editor that such a chart would look unattractive on the newstand.

These numbers are fairly pointless, without some estimate of how much improvement is due to better treatment, possibly due to earlier detection, and not the result of shifting the time origin as cancer is detected earlier.

It could be said that the traditional newspaper headline itself, bold and black in big letters, displays a poor "data to ink" ratio. Why, the same information could be encoded in type no bigger than that of the body of the article! I've sneered at Seth Godin in the past (one day I must get round to actually making and posting my parody "Napoleon's march to Moscow, as imagined by Godin") but I don't buy into the Tufte church 100% myself.

Tufte makes a distinction between "informing" and "pitching", which I agree with, and takes a dim view of pitching, that I don't share. There's a place for it when you want to sell something. This Independent graphic is piching its issue of the newspaper; it's the graphic equivalent of the text headline, and by all accounts the Indie has sold more newspapers when it does this. I'll see if I can dig up some other examples. I seem to remember a giant text "0%" on one issue's front cover, in white (plain paper) on a black (ink) background. Data-to-ink ratio approaching infinitesimal!

Let me make a small criticism of the figure. The color red usually signals danger, death, conflict, etc. Before you read the text in the arrows, it looks like there are more deaths "Now" than in 1971. I would have made the survivors (and the word Good) blue. But that's just me.

This graphic has a very low information content, but it is effective as a form of "info-tainment". It is successful at piquing one's interest, and for the cover of a publication in a newsstand or bookstore, that's what is appropriate.

A selection of past Indie covers with some vague infographic or infotainment theme, including thematic maps, bar graphs, small multiples, scientific images, and Giant Page-Filling Numbers

Sorry I ran out of time to sort them by theme. More at http://news.independent.co.uk/p1images/.