Junk Charts
Welcome Twitter About Book Blog RSS
Visualizing web statistics
If we report it, it's a fact 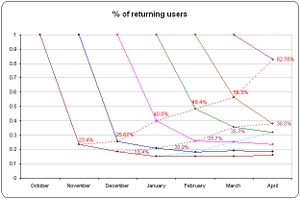 Daniel W of esnips has started a collection of graphics on visualizing web statistics.  The following graph is an attempt to capture the ability of the web-site to attract returning customers.

The time axis serves double duty here: it is an indication of which "cohort" the users belong to, in other words, when they signed up; it is, also, the month of returning visits. 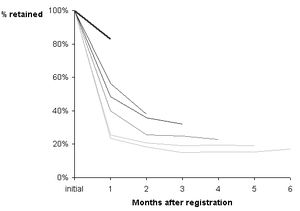 A more typical chart used by statisticians is the survival curve.  As shown here, these are the same curves as above but having the same starting point.  Now, the time axis is interpreted as number of months after registration.  Of 100 members who registered in January, how many returned one month later, two months later, etc.

If the purpose is to evaluate the consistency of retaining customers by cohort, then this graphic is less cluttered.  I also used a fading metaphor to color the lines so that the oldest cohort (also, the longest line) is the faintest.  Line labels are best hidden, and revealed interactively when the user mouses over a line of interest.

Not sure if Daniel was plotting real data; in general, we expect a certain amount of criss-crossing.  If the data is real, then his site has seen uninterrupted improvement every month thus far.

Thanks for the mention. And yes, the data I have plotted is the real data for eSnips. "uninterrupted improvement", that sounds good :-)

Your design is interesting, very clean and elegant. The shading is certainly better than colors. But I like (and my CEO likes...) to see the months ordered and named (she uses it for some presentations), this way she and others can see in a glimpse which month campaigns have led to a better retention rate, and also the overall retention rates.

Alternatively, I tried doing only the 1-2-3 month retention rate lines, without the curves, but I liked the final graph better.