Like any technology, charts also come with peripherals: I'm talking about legends, data labels, grid-lines and so on.  These things typically give us the most trouble, especially with complex data sets.  The analogy is apt: one may feel inextricably knotted up like bunches of cords and wires.

Interactive graphics is a particularly elegant solution to this problem, and Google Finance has done a fantastic job leading the way.  One trick is to show the legend only when the user asks for it. 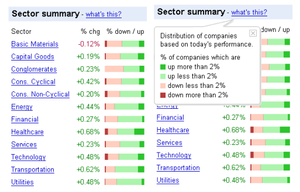 Using bar charts (on the left), Google summarizes neatly the performance of stocks within each industry sector.  The bar chart gives a sense of the dispersion which adds to the average returns printed next to them.  For example, most sectors gained on average but then about 30% of the individual stocks in most sectors actually declined on that day.  So the fact that technology stocks gained 0.48% on average doesn't necessarily mean that the two tech stocks you own gained 0.48% or gained at all.

Typically, we would put a legend on the side or at the bottom of the chart, which all be told, is an ugly duckling next to a well-executed chart.  Here, the legend is hidden behind the "What's this?" link.  The side benefit is that the legend can be as verbose as needed since it doesn't interfere with the chart.

There are a few minor things to consider:

Unlike a static chart, we have multiple options regarding formatting and the overall design of a dynamic chart.

If you have to have a legend, hiding it seems to be a good option for small displays. But you must be sure that you can transfer legend content to your working memory. If there are too many series you can't memorize all the codes. Otherwise, you must leave the legend visible and of course you have a problem, because the legend overlaps the chart.

Of course the best option is to select a design that doesn't need a legend...

"The graph designer seems to think that the most important information ... " is the legend. Hiding parts of the data to be explained. The help should help, not hinder you from using or understanding stuff.
Great Post, btw.

When you have just asked for the legend, it _is_ the most important thing. (And since it goes away when you are done looking at it, hiding data isn't a major problem.) (Not that I wouldn't rather be able to look at both if I wanted to...)

And I disagree, slightly, that 'What's this?' should be replaced. Your suggestions for replacement, while more specific, are also jargon, and may not be readily understood by people who don't use charts regularly. The more generic English link means people who don't understand are more likely to use it, and therefore be informed. (The wording is also consistant across the Google site, making it an expected UI element that can be relied on as the 'help' link on any page, which domain-specific jargon could never be.)

This looks like a graph that people will see over and over again, so incorporating the legend every time would be a waste after the first viewing.

I would like to see what are the hottest and coolest sectors by sorting the sector names by % chg.

I noticed that Google has recently adopted suggestion #3. The charts are now aligned at the gainer/loser boundary. Go see for yourself!