Mirror, mirror on the wall...

I don't see what the second line adds to this plot, given there were only two candidates in this election.

Political graphs do not get much better than those at the Political Arithmetik blog.

For instance, in the chart below, he wisely chose to draw trend-lines rather than connecting the individual dots. 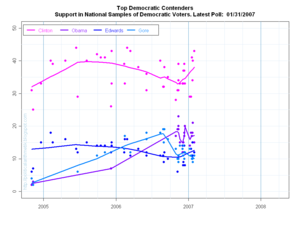 Also, typically, he plots dots for all the different polls, which allows us to assess the variability (reliability) of the observed trend.

Too bad he's not graphing for us color-challenged folks--those blues and purples have terrible color separation, and it's not like all that's on offer is blue pixels. I know it would be confusing to use RED for a Democrat these days, but how about green, or orange, or brown, or....pink?

I guess the original mirror plot is just showing that for every winner, there's a loser.

I think the mirror plot shows that the editors were more wed to their turn of phrase--"Separation of the Ways"--than they were a sensible display of the data.

I do have to admit it was quite a clever phrase :)

Point on color separation taken. I'm looking into colors that separate but are also subtle, rather than glaring primary colors. This one missed the mark.

If anyone would like to give me some critical commentary on the graphs at PoliticalArithmetik, I'd like to hear it. I appreciate the positive comments here, but I would benefit from some serious criticism of the design as well as color choice. Aspect ratios? Better ways to put lots of information in a crowded graph? What do you think of the triangular plots I've been doing recently? Graphical critiques would be very welcome. Email me at charles@politicalarithmetik.com

I think that a line chart w/ the opposite information on the other side would have been more useful. The area at the vertical instance would show the % of the population dominated.