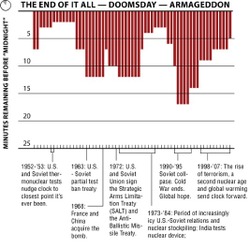 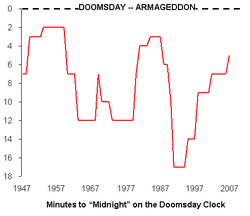 At least in the German language, there is a saying "it's five minutes to twelve" ("Es ist fünf vor zwölf") indicating that something bad is about to happen very soon. But I don't know whether it has the same meaning in other languages

Can you find a way to integrate nicely the comments about the timeline (the text below the NYT graph) in your linechart ?

This is what makes such a graph interesting: not only showing simple uni- or bivariate data, but actually include other information that explains the data.

Good example of this in Edward Tufte's forum:
http://www.edwardtufte.com/bboard/q-and-a-fetch-msg?msg_id=00006W&topic_id=1&topic=Ask+E%2eT%2e

A step graph would be a slight improvement on the line graph Kaiser provides. The angled lines are distracting, and imply a gradual progession from one clock hand position to another. In reality I expect the hand is moved all the way to the new position on a single day, and remain in that position for weeks and months.

I think a bigger improvement would be some variation on a dot plot, with the end of the world on the extreme right, the "minutes to" scale on the top, and the years scale reading vertically down. This would give more room to present the context paragraphs as single lines instead of squeezed columns.

Frederic: I was too lazy to add the commentary. You can do it by stretching out the time axis. Also, be very precise in the comments.

I'd also remove the vertical axis entirely because when you have comments, you are pointing out the highs and lows at key points in time so why not print the number of minutes next to the comments?

Derek: It would be better to use a step graph as you suggested. Now that you've pointed it out, do we believe that the clock's hand would jump around in increments of one minute, or do we believe the dangers facing us accumulate and reduce continuously?

I tried a different version of the clock, where the minute hand represents probability of a particular kind of disaster and the hour hand the size of disaster. By using a log scale (5 minutes/1 hour = 1 order of magnitude) it is possible to represent threats down to 1e-12/year and between subperson lethality to human extinction. The downside is of course the increased complexity and the risk of people misunderstanding the log scale.

Why not invert the Y axis? As it is, armageddon is just a dashed line sopmewhere above the red line. The reader doesn't easily realize that what matters is not the distance of the red line from the X axis but its distance from the dashed line.

Put armageddon at the X axis, and everyone will immediately notice how much the gap has shrunk.

Rosie, I believe you may be right. I tried creating a step graph earlier, but with the bars gone, there's now no compelling reason to interpret the line as distance from the top anymore. The more conventional y-axis now works better, I think.

I also tried a version with the time axis running from top to bottom. All three incorporate Frederic's suggestion of labelled events, but the graph software I am using (Excel) has no good way of presenting large paragraphs of positioned text in long lines; both axis labels and data labels are heavily wrapped by default, and text boxes that do allow long lines can only be positioned by hand.

Derek, the vertical graph works nicely. what is missing from all these charts is the sense of impending doom (what objectivity?)

Maybe the lines can be colored in such a way that when it gets closer to 0, the color becomes darker? Not sure how else to make this point. The 0-line is crucial in this case, in my view.

Good point. That's what the original did, in fact. The Y axis started at zero at the top, and the bars hang dwn from Armageddon.

(But yes, the original bar chart is horrible)