I agree with JF who suggested that this chart was mind-boggling.  The chart accompanied a somewhat diffuse NYT article postulating that tax break or shifting medical practice or less apprehension about tired nurses or added labor-inducing stress from visiting relatives may have something to do with more babies being born in December, particularly at month's end.

This chart presumably shows the "spike" in December births, or more precisely, the shift of January births into December.  The trouble with it is its lack of comparability.  We need to compare the 2002-3 trend to some prior year to see the shift.

Even then, we would have seen only one data point.  So it would have been better to plot multiple years.

Finally, after reading the article, I cannot discern the importance of Monday and Friday.  The yellow-pink coloring has not improved my comprehension of the data; it leaves me with more questions than before. 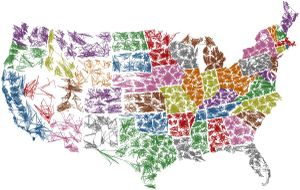 Over at EagerEyes, they created this beautiful visual of zip codes in the U.S., proving that scribbling is art.

They took the zip codes in numeric order, connecting all of them in a line.  The colors represent States.  We begin to see some order in the 5-digit madness.

Of course, such scribbling serves a specific and highly appropriate purpose here, and would not be generally recommended. 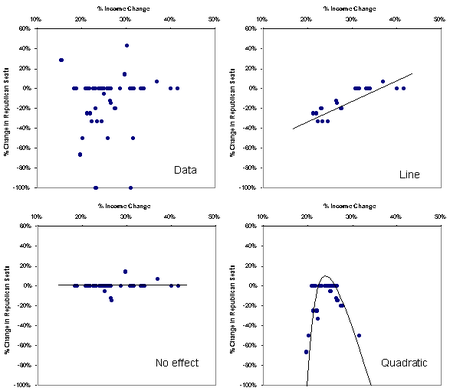 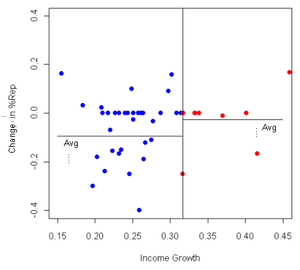 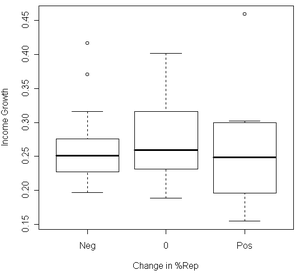 A contribution from a regular reader: apocalyse U.S. News style! 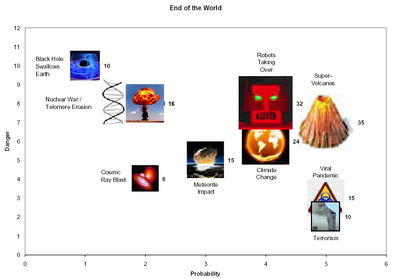 According to the scientists, super-volcanoes and viral pandemics are our biggest threats.

As the end of the year approaches, my posting schedule will be less predictable, and may at some point stop till 2007.

As before, I have put up a holiday wish list (it will be seen in the right column during the holidays).  If you've enjoyed this blog, consider a small gift to help stock my library.  My selection this year is a mix bag of interesting reads. 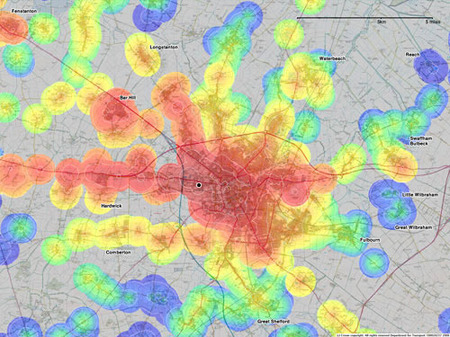 One of my scientific heroes and seminal teachers is Professor Frank Kelly at Cambridge.  What a pleasant surprise to see his involvement in a data visualization project.  To cite his wise words:

The travel-time maps are more than just pretty to look at; they also demonstrate an innovative way to use and present existing data. We are entering a world where we have access to vast quantities of data, and ways of turning that data into information, often involving clever ideas about visualisation, are becoming more and more important in science, government and our daily lives.

The little black dot near the center of the map indicates the Mathematics building at Cambridge.  The contours (vaguely visible at our scale) represent intervals of 10 minutes by public transportation away from the black dot.  Any colored dot on the map refers to the time at which a traveller must leave in order to get to the Math building by 9 am, taking into account traffic situation, time of day, and decisions.  The hope of such maps is to help commuters (by public transit) plan their travel.

Professor Kelly has a very nice write-up on the intricacy of generating the data for such a map, which includes techniques of sampling, smoothing, extrapolation and so on.  It is rare that we get insights into the chart-making process.  He also carries a larger version of the travel-time map.

A similar article can be found at Plus magazine. 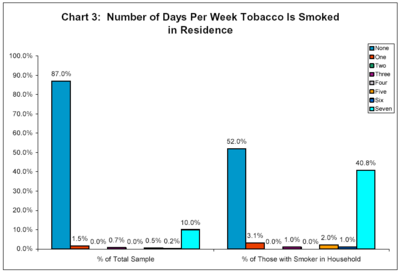 This graphic, unfortunately chosen, contains many distractions from the main message, including:

One of the key functions of a graph is data reduction, i.e. to aggregate data in such a way as to expose the information contained within.  Typically, a graph that uses aggregated data is clearer and stronger than one that plots every piece of data.  In this example, by combining 1-6 days into a single category ("smokes in residence part of the week"), we have a graph that is much more readable.

I want to thank Dr. Mike Rabinoff for inspiring me to look up these second-hand smoking statistics.  Mike recently published a book called "Ending the Tobacco Holocaust", which tells you more than you want to know about the tobacco industry.