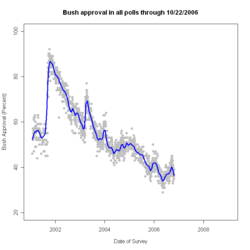 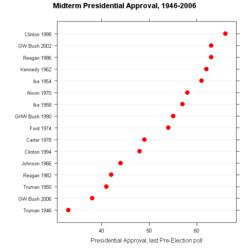 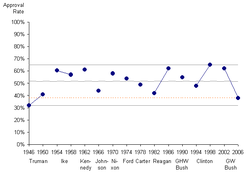 The third chart could use red and blue to indicate whether the president was a Republican or a Democrat.

Isn't it remarkable also that he has both the second-lowest and the second-highest approval rates??

In most cases, isn't it the case that if a President had two mid-term ratings, he would have had two terms?

Political history is definitely not my forte. So I stand corrected.

I find the tick-marks associated with the years confusing; years are not points on a line. I'm guessing that it marks January 1st for each year?

Placing the year labels between the tick-marks would be clearer.

The years are categories along the categorical X axis (along with the labels indicating current president).

If you want a precise date, the relevant mid-term approval rating is that measured just before the elections in early November.