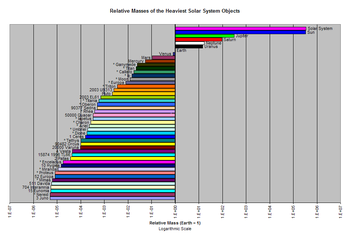 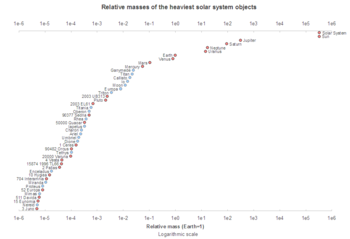 The asterisk would seem to indicate planetary satellites.

Non planetary and non satellite objects are indicated by the numeric prefix to the name.

Powers that be at Wikipedia? Derek C. can just go and edit the page himself if he doesn't like the current chart. Isn't that the whole point of Wikipedia?

But in any case, I agree that the original chart is UGLY!

I had said to Kaiser in my email that I might pop it on Wikipedia when I had time and energy, but I haven;t done it yet. I may have used the word "submit" or something, because the whole point of wikis is that what you feel like putting on, someone else might feel like taking off. Everyone's a critic :-)

Personally, I have a lot of respect for the editors' sensibilities, and so I rarely make actual substantial changes myself, but instead post a proposal to make a change in the "Talk" section. If not a single soul feels moved to say "Yay!", it probably wasn't such a vital necessity after all.

Indeed, everyone is a critic. But, the purpose of critique on Wikipedia isn't to spark endless bitching sessions, but rather, in the most democratic of ways, to make each page as good as it can be. If you've got something better (which you plainly do, Derek), post it. You may not get much from the Talk section of the page, but, this forum has already lauded your superior efforts. If you do find the time to post it, you'll be using your expertise to improve the page, which is what wiki is all about.

I would have uploaded it at 1000 or 1200 pixels size, but the dreadful 800-pixel version is automatic, and of worse quality than 800 pixels has to be, so I made my version 1600 pixels in an attempt to make the "compressed" version as good as it can be (the compression is strictly 2:1, so it shouldn't introduce any artifacts). Click through for the hig-res original.