At the TCS blog, Tim Worstall attacked a chart comparing global levels of income inequity, originally published by the Economic Policy Institute.  His post is here.  Tim claimed that this chart proved precisely the opposite of what the EPI intended it to show, that is, that the chart showed that "the poor in America have exactly the same standard of living as the poor in Finland (and Sweden)", two countries which he derided as "redistributionist paradises".  From this, Tim concluded that the U.S. is doing enough for the poor. 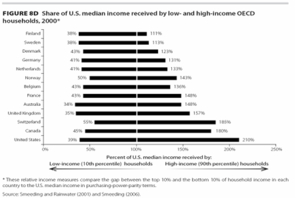 For the EPI, this is a case of arming the competition.  Echoing Robert's comment from yesterday, this is one chart that opines but should have murmurred.

The chart is a very convoluted way to study the idea of income inequality.  The first bar states that the 90th percentile income in Finland is 1.11 times the median U.S. income, after adjusting for PPP.  Notice the simultaneous change in percentile and country, which complicates our understanding of the difference.

The median income is perhaps the simplest (not most informative) measure of income equality.  In the EPI chart, the edges of each bar describe the 10th and 90th percentile income in a country.  We only know 80% of the population lie within each bar but nothing about how they are distributed. 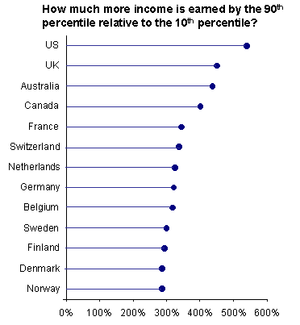 In the revised chart, I plotted another popular measure of income equality, the ratio of 90th percentile to 10th percentile (since the data is readily available from the EPI chart).  It's clear that inequality is highest in the English-speaking Western world where the top earners get 4-6 times more than the bottom earners.

This income ratio is computed for each country, and can be used to compare across countries without resorting to another index.

Nice clarification ... question is now why are we discussing income equality

It would have been interesting to see the median for the other countries on the same scale, where US = 100.

I am not quite sure that I agree. I think there are two topics here that are conflated:

1) There is an absolute amount of inbcome that the poorest/wealthiest receive. The graph shows clearly that the poor in all these countries receive more or less the same income (although this excludes softer factros, such as healthcare insurance) and that there are significant differences in the income that the richest have.

2) This graph does actually not talk about income inequality at all. In order to visualise this, I personally would have chosen a simple ranking/table with the rank, country name and a multiplier of inequity (percentages seem hard to grasp).

Not only did the graph opine, but it opined the wrong way. Here is an example of an institution that is pushing an agenda, and therefore needs to opine. They just picked the wrong means of doing that (some thoughts based on your previous post here, btw).

Your version of that chart is clearly more useful, because it uses the information that is actually the important part. What would be even better would be a histogram showing the different distributions, because it would show the inequality in more detail. It would also allow us to compare how spiky or flat the distributions are relative to each other, which again would be much more instructive and impressive - the whole point of redistribution is to flatten, but flatness of a distribution is very hard to see from percentiles. Few people will understand that at all, but distinguishing a more or less skewed distrbution from a histogram is easy and obvious.

Here's another interesting website about income and distribution of wealth, this one over the whole world: Global Rich List. It's quite shocking to see how well we are doing relative to most of the world, even if we don't consider ourselves rich. It's not a visualization or infographic as such, but it's still very impressive. And it doesn't murmur, either ;)

Searching for the USA figure proved frustrating, so I simply assumed it was £40k, making the country figures as follows:

Using a scatter graph to compare them with the per-capita GDP (taken from table 8.1 of the same paper) produces a surprising result: the real "redistributionist paradises" are not the Scandinavian countries Norway, Denmark and Sweden, at ~50%, but the Francophone countries Belgium, France and Canada, wher the tenth percentile income is a whopping ~70% of the per capita GDP! :-)