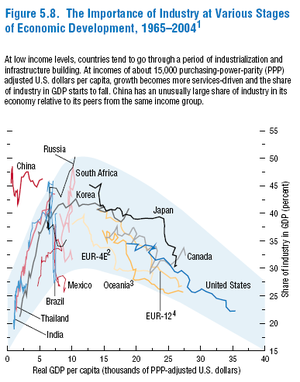 Thanks to Michael S. for sending in this chart from the economists at IMF (via this blog).

At its heart, this is a scatter plot that displays the correlation between a country's development stage (indicated by its PPP GDP) and the importance of the industrial sector to its economy.

On top of that, the chart adds a third dimension of time by linking the dots together with lines.  The lines trace the evolution in each country or set of countries.  Some countries (mostly developed nations) have a clear trend; others exhibit choppy curves which imply fluctuating economic conditions.

We have created this type of chart when discussing the fabulous Gapminder site.

The shading in the chart is supposed to draw attention to an inflection point around $15,000 per capita GDP, wherefrom the industrial sector starts to decline in importance.

In my view, that conclusion is forced because Korea is the only curve displayed on the chart that bridged the $15,000 divide.  Thus, one can say there exists only one data point supporting this hypothesis.

However, one aspect of this chart jumps out at us, which is the chasm between developed and developing countries, right at the $15,000 divide.   On the right side, the rich gets richer in a relatively steady fashion.  On the left side, the poor remains poor.  These nascent economies suffer from a great deal of volatility.  What's worse, the slopes are much sharper on the left than on the right, meaning that the gains in GDP are much smaller on the left of the divide.  Even more troubling are the cases of Brazil and Mexico which seemed to have endured a decline in the industrial sector without much gain in GDP.

The only bright spot is Korea.  (And China is the outlier.)

One small problem with this type of plot is that there's no way to tell which way the lines are going.

Nice analysis. But the comments about 'rich getting richer', that is sure true about industrial (or should we say service?) countries who have a society that allow for increase in GDP and more. What I think that Gapminder shows, is the big importance of which countries you actually include, since the difference between 'poor' countries are enormous, both considering GDP and their respective trend. Questions should be about why some poor never get richer. 'Nuf 'bout that political sides. Nice blog n' all ^_^

As I said in a comment in "Arming the competition", here again is a chart that needlessly conditions the vertical axis as a percentage, when I think that quoting the actual GDP share of industry in PPP-adjusted US dollars would have produced a graph with just as much insight, and without that fake dog leg occupied by Korea. Sometimes reducing everything to percentages hinders instead of helping understanding.

Hadley: we followed your advice in the Gapminder plot; it would help bring out the volatility point here too to include little arrows

Peter: I stayed away from assigning "cause" to the observed result because there isn't enough data here to say anything.

Great idea to link the Gapminder data with this. Their data only cover one year and so we cannot see economic progress as here.

The IMF plot only depicts a few countries and therefore there may be more Koreas. But we do see that many of the most prominent developing nations have lapsed further and further behind.

Ooops - I had completely forgotten that I said that already.

The main drawback to me (provided the curve is for an expert public): not a log PPP GNP scale. Those crammed curve on the left cry for it; and I can remember no graph about development where a log scale wasn't a relief.

I dont think we need an arrow to point at time direction, nor that the light blue area is more than obvisouly the authors' opinion (theory?). And maybe the years are somewhere outside the curve, but we need them too---with maybe important historical events, if relevant.