Junk Charts
Welcome Twitter About Book Blog RSS
Jamming
Where are the crimes? 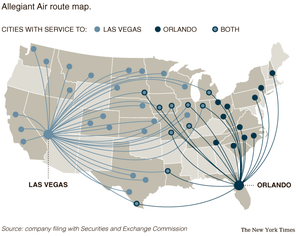 I don't mind the route lines. They're traditional (the route maps in the back of in-flight magazine always have them) and they do help impress upon the reader the fact that only two cities are served, and the location of the cities. (Without the fanning out effect you might be able to recall later that only two cities were served, but not their approximate locations.)

It needs the route lines to make the point. Without them it would have little impact.

Route lines are useful for complex relationships. The beauty of this chart derives from the simplicity of their business model, namely every route connects either Las Vegas or Orlando.

I don't have software to generate this chart but I imagine that it could be slightly cleaner.

I agree that it needs route maps. Take a look, too, at jetblue.com. Its route maps appear when you roll over a city. These are important so you can figure out how to get from a city to another. For example, I was researching a route to Phoenix from Richmond. Where did JetBlue connect for the flight? The map provided a clear way to find this out.

Michael, Tradition is never an excuse for poor design. Note that if the route lines weren’t present, the city labels could have been much closer to the two large dots. Larger dots paired with the labels would reinforce the two cities served. It does this by removing a lot of non-data ink, creating a multifunctioning element: the label.

Spencer, If you’re in favor of the route lines, you should give reasons to support your belief. How do the route lines create “impact” and why would removing them remove the impact as well? What if we removed the route line and made the large dots marking Las Vegas and Orlando huge? Does that create the desired “impact”?

Joe, your example isn't relevant to either the Allegiant map or JetBlue. Both map’s purpose is not to help customers see where their particular flight will be heading. The JetBlue design can be improved by removing route lines as well. For “Coming Soon” routes, color the city dot orange instead of the route line. Make Key City dots large blue to remove confusion with Coming Soon.

Since we don’t really need to see the particular routes, connecting cities can simple be colored light blue. Just to see how the route lines make the map hard to read, select Las Vegas and show connections. The route lines and city labels are so cluttered in New England it’s hard to see if a connection is made in NYC or DC.

If JetBlue wants a ‘find a route’ option on this map, then individual route lines are OK. For instance, you select your departure and destination cities, and it will show the potential routes, with route lines. But clearly this isn’t the purpose of this map as you can only select one city at a time.

I can not do the chart without the lines, but to me it seems that the clear connection to only two points are brought home by the lines. I do not think the chart would have nearly the explanatory power to display the model without the two sets of lines converging on two points.

The purpose of the chart is to display the simplicity of the business
model. Without the lines how the map relates to the business model would be much less forceful.

I thought the route lines informed whether there were direct flights or not. That's very helpful info.

The route lines slightly speed up the viewer's initial comprehension, especially if he has weak reading comprehension skills.