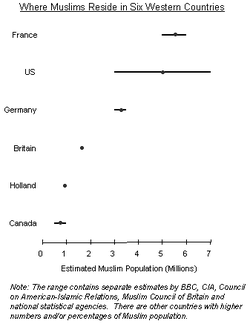 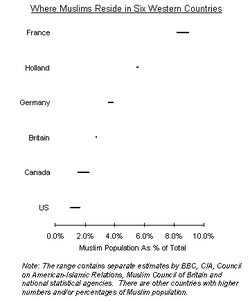 This is not a criticism of your figure but of the data used by the Economist. It implies that there is a great deal of uncertainty in the number of Muslims in the U.S. I don't think that uncertainty really exists. A phone survey asking "What religion do you consider yourself to be" would have a small margin of error.

What we have here, I suspect, is an inflated estimate by an advocacy group, masquerading as data.

I don't know. Looking at the last chart, the uncertainty in the US doesn't look so large. Could it just seem inflated because the US has such a large population?

Ben, your point is well taken although John's point about biased estimation by advocacy groups is still worth considering.

If I had the raw data, I'd plot the 5-6 estimates as dots rather than just the min-mid-max. This way, we can judge if certain groups or types of groups consistently give over/under estimates.

Sorry, but your junkart is more than likely a junkchart... as I think it's lacking in many areas, including appeal, to say the least. The Economist chart is just appealing to the eye, and more likely to draw attention, and thus, be more likely to actually convey information. Whereas your bare-bones approach is distinctly "un-pretty" and less worthy of scrutiny in my judgement. Sorry, but you're way off here.

I for one find the Economist chart very ugly, in addition to being a poor data graphic.

Appeal is in the eye of the beholder.

John, I'm not so sure that is such a good idea. First of all you would need a proper definition of being a muslim, do you have to visit the mosque? Do you have to believe in Allah? Or is it enough to celebrate muslim holidays without actually practising the religion?

Much the same way as so called christians do with christmas and so on. I would certainly qualify as christian since I'm born in western country, celebrate (originally) christian holidays but never ever set my foot in a church.

The above is probably the main uncertainties behind the figures.

Well Mingus (ah um) I will have to disagree with you. People have made similar arguments in regards to race: there's no good definition; biologically, races don't exist anyway; etc. Yet despite all these complications, when the census taker comes around and asks, people know how to answer the question.

Kaiser's junkart version may be "unsexy", but there are all sorts of ways it could be sexed up and draw the casual reader's eye, if that's what you want, without turning it into the version the Economist chose. It's not an either-or choice.

Freaky exceptions like Michael Jackson aside, black people, for example, don't opt out of their race by not going to weekly meetings of the NAACP or to an AME church, while the same person may or may not be a "Christian" depending on church attendance or some other (in)action. Further, especially post 9/11, and given their relatively small numbers, Muslims in the US may especially be reluctant to self-identify in an anonymous survey (but much more likely to self-identify to a perceived fellow muslim. Finally, the US has the added factor of the "Nation of Islam" and other groups which perceive themselves as Muslim but may not be seen as such by other Muslimes (Sunni or Shiite).