"Tropical Storm Debby strengthened as it moved northwest yesterday.  Of the 15 previous storms with positions similar [...], 13 became hurricanes, but only two reached the United States". 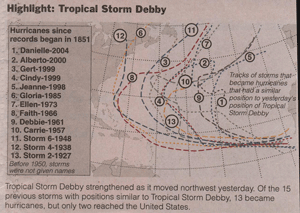 Then only the key data needed to support the accompanying statement would be present.

That chart is a mess. The size of the circles behind the numbers vary in size which seems to indicate something (strength of the storm?) but I can't find a key to that anywhere in the chart. Tucking the chatter off the right helps to have it ignored. The headline of the chart is misleading since there is nothing about Debbie in the chart. And the heading in the box is inaccurate. Also doesn't help that a past storm is also named "Debbie" with no explanation.

And I think you're right on target that the names and years of the storms that didn't make landfall are largely irrelevant.

We used some of this data in our JSM Data expo entry (http://had.co.nz/dataexpo). I think the data is pretty easy to get hold off, or you can email me to get our copy (in a nice csv file).

It's really interesting data to look at interactively, tracing the paths of storms over time etc.