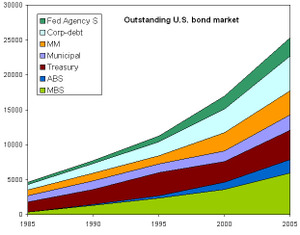 Previously we saw that the appearance of stacked area charts changes with how variables are ordered.  This is a serious deficiency.

What is the relative prevalence of each type of debt over time?  In the original chart, this information is buried and can be extracted only painstakingly. The junkart version brings out this insight without much fuss.  As a percentage of total bond market debt, US Treasuries has dropped by half over the last two decades, much of it happening in the late 1990s.  Meanwhile, mortgage debt more than doubled during the same period, much of it occurring during 1985-1993.  The current distribution is also more balanced than in the last 20 years, as can be seen from the narrow spread.

A few design features are worth noting.  The vertical axis is given on both sides of the chart.  Limited colors are introduced to help readers distinguish the various lines.  Light vertical gridlines are provided to allow analysis during each 5-year period.  Non-essential tick labels are removed from vertical axes.

In fact, this is again a variant of the Bumps chart.  For more, see here, here and here.


Reference: Data from Bondmarkets.com (via Mahalanobis)

In fact, this is again a variant of the Bumps chart.

This is why I dislike the overuse of the phrase "bumps chart" to describe any line chart where lines are overlaid to compare relative position: ultimately "bumps chart" comes to mean almost any line chart, including line charts where the x-axis is a quantitative time axis.

The original chart of the Cambridge bumps races is a chart of rank (an ordinal category) against day (another ordinal category, albeit one easy to confuse with a continuous quantity). It looks like a lot of line graphs, but I'd like to keep the name "bumps chart" just for those that chart rank against stage, not quantity against continuous time.

Derek has a point. By the definition of Bumps Chart implied in this article, any time series chart with two or more series is a Bumps Chart.

In any case, the line chart is a much better chart than the stacked area chart.

While I applaud the effort to reduce clutter, I found the missing 25% label and tickmark from the left axis and the missing 30% and maybe 35% labels from the right axis more distracting than their presence would have been.

The improvement I would suggest would be to apply the same color to the font of the series labels as to the lines they are labeling.

The new chart is no longer misleading, but it conveys entirely different data than the original. The original chart was about the absolute size of the bond market, the new is about the relative sizes of the componets of the market.

Closer to the original intent would probably be to have the vertical axis be dollars, and to have another line for 'total bond market'. It would still show the relative amounts of each sub-market, if not quite as clearly. And it would allow the orignial point of the chart to show through: the growth of debt over time.

What I have been calling the Bumps chart is a subset of time-series line charts. I can characterize these charts as follows:
- the purpose of Bumps chart is to make comparisons between different measurements at two or more points in time
- the vertical axis is provided on both sides of the chart as typically comparison at the start and end of the period plotted is of special importance
- in multi-period versions, vertical gridlines are necessary in the middle of the chart to aid comparison
- the original uses rank measures but continuous measures can also be used except that
- when continuous measures are plotted, the lack of uniform spacing between time series often poses difficulty in labeling

Daniel - it's hard to see the original intent because with a stacked area chart, you can read off the growth of the largest, and smallest, data series but everything in between does not relate to the growth of one asset class but many. I'll have more to say about this later

All I mean is that the one thing the orginial chart does accurately display is the total size, in dollars (I assume), of the bond market.

I can't get that off your chart even by adding the lines together. You've totally thrown out absolutes in favor of relative. Which might be better info for a particular point, but it is *different* info.

Your chart is better at conveying its information, but there is information present in the orginal that is not present in yours, because of the choice of data to plot.

And the bumps chart is just a special case of the parallel coordinates plot where the coordinates are ordinal observations (ranks) and the axes are arranged in time order.

I think creating names for special cases of general plots is a bad idea, especially when we have tools (eg. the grammar of graphics) that allow us to describe plots in a composable manner.