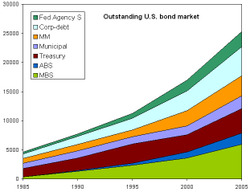 Michael, over at Mahalanobis, sent over this chart (via this blog).  The person who created this chart later described it as a kind of "optical illusion", pointing out that the set of upward sloping lines interferes with our ability to read the 2005 data.  For example, was the MBS market (light green area) over or under $5,000?

A lively discussion at the blog concerns whether this is an illusion or just a junk chart.  It really is both.  Normally, by putting the vertical axis on one side (usually the left side), we require our eyes to trace an invisible horizontal line to read off the data.  The slanting lines, multiple colors and horizontal distance all conspire against us in this case.  However, this illusion can be summarily corrected by providing the same axis on the right side of the chart so it's really no big deal.

This type of stacked area chart has much bigger problems.  To wit,

Both these charts and the original chart contain exactly the same data.  Our eyes fool us by thinking that they are different charts.  The topmost line in each chart is indeed the same.  The next lower line, however, is different on each: on the left, that line represents the bond market excluding US Treasuries; on the right, excluding mortgages; and so on.  Every line except the topmost (and bottom most) line is information that cannot be easily digested.

For all these different objectives, there are better charts.  In the next post, I'll consider some alternatives.