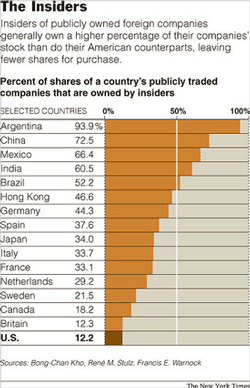 New York Times published a bar chart reminiscent of the one discussed here last week.  They added the 50% line and did not cluster the countries into groups of five.

I like this chart for clarity and simplicity.  (Removing the decimal from the data would improve it.)  The U.S. and her special partner stand out as countries with the highest outside ownership of corporate shares.

Until I scanned the article itself, which startled and started with:

It turns out that most American investors are not xenophobic... Shareholders in the United States have been criticized as harboring "home bias" -- allocating far less to foreign stocks than they would if they did not let familiarity, patriotism and national loyalties stand in the way.

The dots don't connect, notwithstanding the academic references contained.  The chart shows how much U.S. stocks are owned by outsiders (which includes some foreigners but also many U.S. investors).  What has this to do with how much money U.S. investors spend on foreign stocks?

Even a good chart can't save a poor story.

I don't mind the decimal. It is drawn with that precision (as can be seen by suble variation in bar lengths that differ by a fraction of a percent) and the source data can have that precision. It can be argued that such precision helps emphasize the point, as even Britain has slightly more insider investing than the U.S. (if that was the point of the plot)

While I would agree that more evidence should be presented in support of this hypothesis, I do think this chart helps to illustrate that point. (Naturally, this would fall apart if the article presented some third hypothesis which wasn't xenophobia or scarcity of foreign stock because of insider investing).

My only nit about the chart is that it emphasizes the bar for the U.S. (by bolding the text and the darker coloring for the bar). This would seem to suggest that the point of the chart is to show that there is a low percentage of insider investing in the U.S. While true, the caption of the plot makes the claim that the plot is meant to show what is happening in foreign stock. The U.S. is thus only a "benchmark" & shouldn't be emphasized. I'd have maken it the same or would attempt to de-emphasize it with a lighter bar or, more likely, another vertical line similar to the 50% line.

hi edward, great blog. i think atom probe is right, the nyt article is making the point that home bias should be blamed on insiders in other countries not on americans' propensity to buy u.s. stocks. "A better measure of home bias would focus only on shares not owned by insiders. Calculated this way, Americans’ home bias would be smaller in the case of almost all foreign stock markets, Professor Warnock said."