Enigma of the big-buck pitcher

A data table accompanied a recent NYT article pointing out that big-buck pitchers were far from sure wins for those clubs who have taken Scott Boras' pitches.  The table contains a wealth of data but very little information is immediately revealed to the reader. 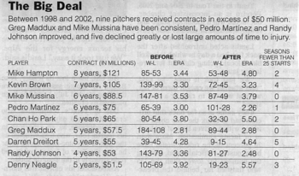 Sorting by size of contract makes no sense, especially since the key metric of success, i.e. change in winning percentage pre- and post-contract, cannot be discerned without pulling out a calculator.  Further, once the contract size is expressed by dollars per season, it is clear that all these contracts fall into the same range (about $10-13 million per year). 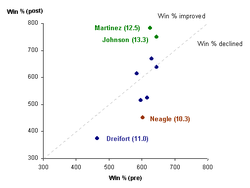 One graphical alternative is shown on the right.  It brings out the desired message, that big-buck pitchers may or may not perform after signing big-buck contracts.  Several pitchers are annotated as these have improved or declined by more than 200 points.

A graph cannot hope to achieve the data density of a data table.  But the process of making a graph forces the designer to focus on the most important data, which itself has great benefits.

..though the use of W% to measure the effectiveness of baseball pitchers is questionable, at best.

But hey -- several of those names (e.g., The Pedro) were for a time the Best Pitcher In Baseball. Just not usually post-big-contract.

The pre- and post-contract ERA tells a similar story:
http://peltiertech.com/Excel/Commentary/BigBucksERA.png

Looks like what we might have here is a case of a restricted range degrading the overall correlation.

The overall correlation between salary and performance may be fairly high, but looking at a restricted range (just people at the highest level) makes the correlation look lower.

However, another way of looking at what I just said is that while there may be a substantial overall correlation, there is still a lot of error around the prediction for an individual point.

In terms of pitchers -- well, there are a lot of things that can happen to a pitcher over the years, and most of them are bad. So, I'm not even sure how strong one would expect the underlying correlation to be between past years and future years.

[I'm posting from Chicago, where the past Cub phenoms Kerry Wood and Mark Prior have never lived up to early potential due to persistent injuries.]

How well do baseball pitchers' salaries correlate to ERA overall?

I'd be more interested in seeing the amount paid for the pitcher's contract vs. the teams revenue increases the following seasons. I somehow think that may be a more important statistic to a team owner.

My favorite book on sabermatics is "Curve Ball" which does a great job of analyzing these correlations with the precaution as befits statisticians. Is there such a thing as a "streaky hitter"? What's the value of a single versus a double? You can get your answers there.

It would also be interesting to investigate whether these pitchers are able to "time" their contracts. Do they have insider information (injuries, etc.) that allow them to maximize their value right before they decline?

Ben: You might want to take a look at Baseball Between the Numbers by the authors of Baseball Prospectus.

They have several chapters covering these kinds of issues, including the financial value of player signings. It's also a great overview of sabermetrics and the methodologies BP uses.

Awesome site. Want a tip to make your scans look better? Put a sheet of black paper (not white) behind the page you are scanning. It will cause all of the bleed-through printing on the other side of the page to disappear from the final image. It's counterintuitive, but it works like a charm. I learned this when I was a picture framer and had to mount newspaper clippings -- we always mount pages with printing on the back using black backings.