Fund management companies provide a great source of materials for this blog.  Compare Evergreen's pitch with Pioneer's. (The entire ad is here.) 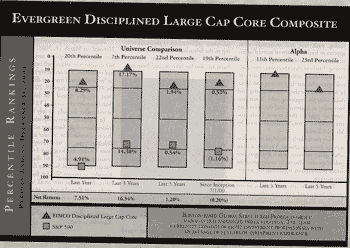 Perhaps this ad is targeted at highly sophisticated readers; it appeared in the Institutional Investor magazine.  Otherwise, they cannot assume a casual reader understand "universe comparison" and "alpha", and how these two concepts relate to each other (or not).

While boxplots have been tailored in many effective ways, this particular variation on the boxplot would surely have Tukey turning in his grave.  This is the boxplot used as gridlines. The six boxes in the plot are identical, and each includes the 10th, 25th, 50th, 75th and 90th percentiles.  This information duplicates what has already been given in the vertical axis.

More seriously, the vertical scale should never have been percentiles.  It should be the net return rate.  In this way, the reader can compare the level of returns at different time scales.  The astute reader will notice that the return was only 0.7% better than S&P during the last five years, even though in terms of separation of the dots, this performance appear equally as strong as during the last year when the performance difference was 3.2%.

And finally, a question for those in the fund industry: it troubles me that the chosen benchmark (S&P) performed at the 90th percentile in the last year.  There appears to be two different benchmarks at play in this graph, one being the S&P, the other being the universe of funds included in the computation of percentiles.  Therefore, if S&P were the right benchmark for this universe, one would expect its performance to be roughly at the median of the universe.  This is clearly not the case, by which I interpret to mean that S&P is not the right benchmark.  Am I missing something here?

In reference to your question ("Am I missing something here?") -- I think the S&P 500 is the correct benchmark for this Evergreen fund. The fund touts itself as a "large cap core composite" fund, which would seem to track the performance of the S&P 500. The problem is that actively managed stock market funds tend to under-perform the S&P 500. In any given year, at most 25% of actively managed funds out-perform the S&P, and in many years, only a handful of funds (10% or so) out-perform the S&P. This is due to several factors, such as transaction costs and management fees. Even passively managed index funds have a tough time beating the market if the management fees are excessive. That's why John Bogle of Vanguard is such a fan of indexing - you just can't beat the S&P consistently year-after-year with an actively managed fund. So instead of wasting time trying to find great managers (high alphas - which are in very rare supply), it's best just to kick back and let a Vanguard index fund do all the work for you...

Dominic, thanks for your comment. I'm perplexed: am I reading the chart the wrong way? What I see is that the S&P is ranked at the bottom percentiles in each of these boxes. If this were true, then one has to come to exactly the opposite conclusion, that actively managed funds like Pioneer's are better than indices.

Hmm, I'm actually not able to read the chart that well and I found the whole chart a bit confusing as well, but I think the basic problem is defining what the term "universe comparison" means. Does it actually mean "galaxy comparison" (i.e. the group of all large cap core composite funds, but not any other types of funds) or does it really mean "universe comparison" (meaning all funds out there, even those that invest in small caps, foreign currency, and everything but the kitchen sink). Anyway, I stumbled across a great article by Jonathan Clements in Wednesday's Wall Street Journal (page 1 of the Investing section) - he tackles exactly this problem of defining the proper universe of stocks and explains why it doesn't make sense to compare small cap performance with large cap performance.

Apparently, readers were e-mailing him with news that they were beating the S&P 500, and he described why they were probably using the wrong benchmark. (i.e. if you're investing in foreign stocks, why would you brag about beating the S&P 500?) You can find the article online this week for free, thanks to an open house the WSJ is running. Might be worth taking a look or tracking down yesterday's paper...