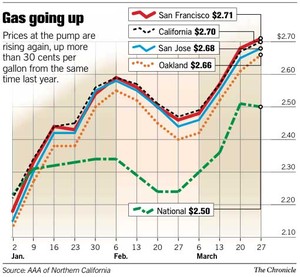 Here's a pretty effective graphic that shows the rising trend in gas/petrol prices since January, and in particular, the far bigger jump in California against the national average.

It's interesting to examine the array of aesthetic "enhancements" that was deployed:

Finally, if the intent of the chart was to judge the difference between California and national gas prices, then a much longer time horizon is required.  Our curiosity is piqued by the convergence of the lines at the start of 2006; what had been the trend the year before?

BTW, if you look at that link, you can see why the graphic used those dates on the horizontal axis.

Thanks Robert for the data source. I think it confirms that they were plotting weekly gas prices; the point that using generic "week 1", "week 2" etc. labels would have improved readability is still valid, I believe.

Those are prices on the reported day, not average prices for a week. From the EIA: "Every Monday, retail prices for all three grades of gasoline are collected by telephone from a sample of approximately 900 retail gasoline outlets. [...] The reported price includes all taxes and is the pump price paid by a consumer as of 8:00 A.M. Monday."

I think the use of dates is reasonable, and likely to be of more use than 'week 1' etc.