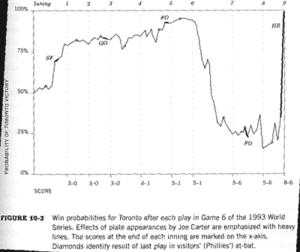 Neat. If you want to make your own graphic like this, you can use an Excel program that will calculate the expected win probabilities. You just need the play-by-play of any game.

In case you were not aware, you can see live win probability graphs of every game at www.fangraphs.com.