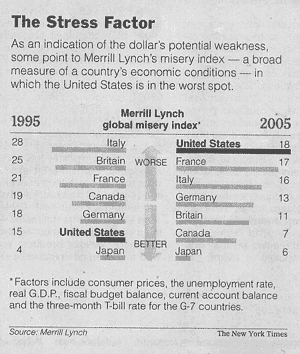 This chart, aptly titled, imposes significant stress on readers.  The key message appears to be that "misery" as defined by Merrill Lynch has increased sharply in the United States in the last decade, vaulting it to first place amongst G7 nations.

That conclusion is an unfortunate misreading of the data.  Keen readers will notice that the absolute U.S. index increased only by 3 points yet the U.S. rank dropped from 2nd best to worst.

To add to the confusion, the two sides of the bar chart utilized different scales.  For example, Germany's bar (18 on the left)  is about 1/3 the length of U.S.'s bar (18 on the right).  And the fact that Japan's left bar (4) appeared longer than its right bar (6) and about the same length as U.S.'s left bar (15) indicated sloppy editing.

In other words, this is a chart not worthy of a fine publication. 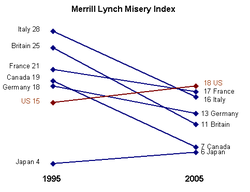 As usual, the Bumps chart (here, here, here, etc.) is the best way to highlight all the important learning, namely:

Further insights can be obtained if we have data for the intervening years.

A key characteristic of a good chart is low stress factor and the inapt published chart failed this test.

Can you make a BUMPS chart in Excel? I can come close using a line chart, but it doesn't look as good and takes a bit of work.

Did you see the Economist ran the same data in a bar chart this week. I thought it was informative (and not entertaining). What did you think?

I have made Bumps charts in Excel. The trick is to click on the X-axis and *not* to have Y values "cross between categories". The effect is to squeeze out the redundant space on either side of the graph.

However, it is difficult to get the data labels exactly right. It is particularly hard for multi-period Bumps chart because the data label function does not seem to recognize the presence of a 3rd dimension.