This chart shows why statisticians don't like seeing two vertical scales.  The top chart on the right is roughly the same as the original.  The bottom right chart compresses the vertical scale so each unit of length represents twice as many dollars as before.  This small manipulation effectively halves the slope of the line and so the growth appears less pronounced in the bottom chart.  But there is no reason to pick one over the other: they plot the same data. 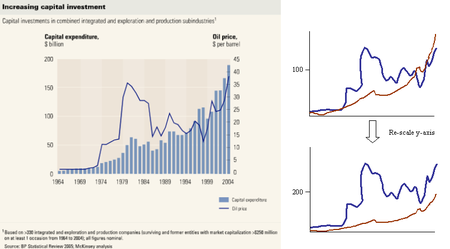 Observe also that the criss-crossings between the blue and red lines are artificial, as they disappear from the bottom chart which plots the same data.

Finally, a scatter plot is better able to show the inter-relationship between oil price and capital expenditure.

In the bottom-most of the charts on the right, the one with the Y-axis rescaled... are you certain that the blue line got rescaled along with the axis?

What am I missing?

I've responded to your cross-posted question over at YARG.. er... Flares. The second axis is not shown on the redrawn charts, but in the original there were two - one for the price of oil and one for capital expenditures.

Yup. My mistake, Morgan. I looked without reading even remotely carefully. My only defense, and a weak one it is, is that the second Y-axis against which the blue line is plotted should probably have been shown on the two graphs on the right.

Glad you figured it out. I should have said "rescaled the left axis" to make things more clear.

Wasn't until I read knucklehead's post that I realized the left axis was for the columns in the original chart. The fact that the blue line rose quickly and spent most of the time above (and to the left of) the columns gave the mistaken impression that it belonged to the left axis.

This illustrates my own conflict with dual axis charts: how to make it clear which axis accompanies which data, and how to display the series of data without one obscuring the other and without showing false interactions between the data.

Is it possible in Excel 2007, in order to graph clusters of widely dissimilar data, to have multiple scales on the Y-axis?
Please respond directly to my email. TIA.