Looking at a time-series chart like this, I can't help but think "save thee from the index".  Indexing to some arbitrary value is a very common tactic used in graphs but in many cases, its value is dubious.

This added data fails my self-sufficiency test: removing the printed data takes away our ability to know which country consumed the most alcohol in any year.  It also induces confusion as we now have an unordered list of numbers right next to the vertical axis labels. 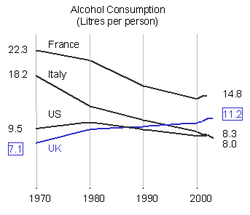 Untangling the transformation (indexing) is equivalent to shifting the four lines up and down while keeping the growth trends as seen in the shape of the lines.  See the junkchart version on the right.  Note the use of my favorite construct, the Bumps chart.  (See here for another example).

Since I am using a different data source, I have only decade by decade data except for 2000-3.  But I have data back to 1970.  Now, we perceive both absolute and relative information at once.  For example, while the French have reduced their drinking significantly, they are still the biggest consumers among the four groups.  And we know this for 2003 as well as every other year plotted.  Most importantly, we take in more information after discarding the index!