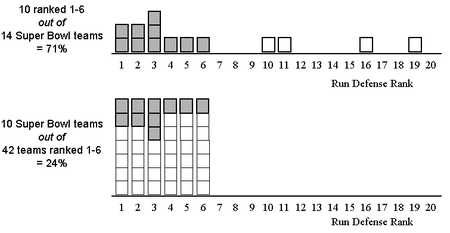 This type of error is also called the "prosecutor's fallacy".

Journalism shouldn't automotically be subject to such critical scrutiny unless the article is trying to draw concrete facts. This is simply an artistic, non-scientific, fanatical, ray of hope analysis.

I mean heck, if you're a Giants fan it's about all you can rely on. ;)

to be cynical, sports journalism is nothing more than sports marketing; so if you take that view, then there is not much more to say

but still when the reporter cites data ("concrete facts") as in this case, he should not misrepresent it. calling a 25% chance 70% is quite a leap.

You call that "ray of hope"; I call that "false hope". It's all in your perspective.

He didn't say anything about "chance". Technically, there isn't anything statistically incorrect about what he stated. The data was accurate.

Granted, the manner in which the data is presented can lead itself to a misperception, but that is the fault of the reader as much as the writer.

If anything, what is in error is the extent at which the critic read into what the journalist wrote because the journalist, from this excerpt, doesn't state anything about "chance".

The critic himself makes a fairly substantial statistical error, if you want to look at it via "perspective", he writes:

"To appreciate the difference, one has to realize that in those seven years, 32 teams that were ranked top 6 in run defense did not reach the Super Bowl (as opposed to 10 teams which did)."

Ok, that's asinine...in 7 years exactly 14 teams will make it the SB. 10 of those 14 had a top 6th ranked defense. So, you could just as easily argue, using the critics own logic analysis, that they have a ~71% chance.

Back to the point...I think the facts stated support the assumption stated which was simply: Rush defense is a strong barometer of championship potential.

Both the writer and the critics data could support that.