Junk Charts
Welcome Twitter About Book Blog RSS
Review: Gapminder 2
When not to use bars

Sophisticated ideas are difficult to get across in a chart.  For instance, the NYT recently described the gender gap in the workplace by comparing the proportion of men versus women in managerial positions relative to the overall proportion.  Two simultaneous comparisons are taking place, one between men and women, and the other between managerial positions and overall employment.

The published chart (below left) used eight pie charts.  To my eyes, this graphic is confusing, not least because the primary comparison between managers and overall is set far apart.  The junkchart version (right) tries to fix this by graphically showing the gender gap using a horizontal line segment. Also, the 50% gray dotted line allows the reader to see quickly that in the three industries where men comprise the minority overall employment, they take up the majority of managerial positions. 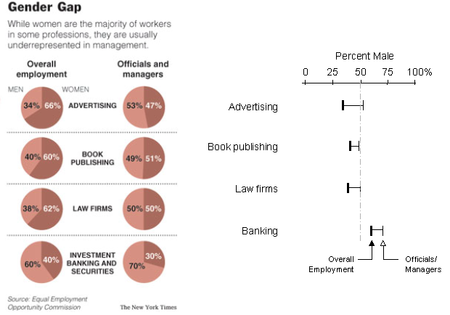 Lovely graph. One small improvement would be to swap book publishing and law firms so that the categories are ordered by overall percent female. I also wonder (since the focus of this graph females) whether the axis should be % female, rather than male.

The second point is particularly true, and I was too lazy to change it after making the chart.