Of myriad abuses of statistics, standardization of variables is one not  discussed enough so I address it here.

This cautionary tale is inspired by a misleading comment in my first post on the suicide data.  In presenting the nine scatter plots, I had said:

Later, I realized I applied standardization by default.  When faced with several variables with different scales, we often standardize, i.e. put them onto the same scale, before making comparisons.  Sometimes this strategy backfires...

A typical standardization procedure involves two steps: 1) centering i.e. shift the average to 0; 2) scaling i.e. express the scale in units of standard deviation.  The following table refers to Dataset 9 in the suicide data, followed by centered data and standardized data.

Observe that standardizing (or more precisely, scaling) compresses the data spread, which means artificially changing the shape of the distribution.  It turns out that to show that the suicide locations are not random, we need to discover that Dataset 9 has significantly larger spread than the other datasets (see here and here).  By standardizing the variables, I had inadvertently thrown away this key feature! 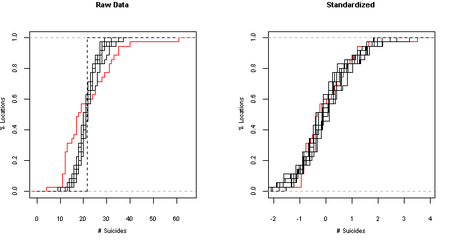 In both cases, Dataset 9 did not stand out in the standardized data plot.

So my advice is: never standardize by default; always understand how standardizing changes the distribution.

A recap of the series exploring the nature of randomness:

The Problem
The Data
First Analysis
The Boxplot
Standardization