Junk Charts
Welcome Twitter About Book Blog RSS
When not to use bars
Saving indices?

The next chapters of Gapminder take the scatter plot of income and child mortality further.

V. Income and health of countries Concept used: standard deviation, measure of location and of dispersion

Highlight: this chapter is an amazing illustration of why it is dangerous to look at only averages but not dispersion.  The screen shot on the left shows that Mauritius is nothing like the rest of Africa in terms of income or of child survival rate.

Alert readers will notice that Gapminder has switched the y-axis from child mortality to child survival, which is significantly easier to grasp even though the data is the same.  (Did they read Hadley's comment?)

Food for thought: 1) The labeling of the log scale for child survival rate may confuse some.  2) The population size dimension as rendered in bubbles interferes with our understanding of the correlation between GDP per capita and child survival while adding little if any value. 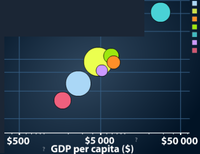 3) The log-log scale can easily mislead us in judging the magnitude of dispersion.  Even though the countries in OECD (aquamarine bubble) look relatively less dispersed, in reality, this may not be so because small distances on the right side of the page must be translated conceptually to large distances (to reverse the log scale). 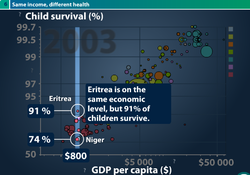 Highlight: This chapter is a tour de force in explaining how to read scatter plots.  Besides, it proves how animation can significantly improve instruction.  The screen shot on the left is but one example.

We discussed development paths last time.  Chapter 8 drills down further into distributions within countries; its only disappointment is the lack of data, especially for OECD countries (wanting to hide social inequality?)

Conclusion
This is an all-around fantastic effort to bring color to the voluminous data in the Human Development Report.  Many important statistical concepts are included and carefully explained (histograms, means and dispersion, different levels of analysis, scatter plots, etc.). In some cases, the choice of graphical construct exposes its limitation.  What's more, the producers apparently are open to feedback; I have detected some improvements already and a Chapter 9 has appeared after I completed my review.  Here are my reviews of earlier chapters.

1) In the whole presentation the area represent size of population. To keep peoples focus on what really is beeing told we always try to keep as many visual parameters static as possible.

2) When comparing averages for population of extremely different sizes: Vanuatu & China, the size of bubbles make the user keep the "relevance" in mind, by "weight" the visual impression. Comparing nations is actualy far to agregated, but thats the data UN have collected so far...

3)It is a bit faster to find a country when looking for: "a big country in Africa"

4) Lots of people find the bubble chart FAR more atractive compared to a plot with small dots. Probably because we can paint these bubblles with nice colours and the whole thing looks more appealing.

Hi there, like the post. I'm a big fan of Edward Tufte and spotting charts that hinder more than help. I have used bubble charts in a representation of a portfolio of products. Would be curious to get your take on it? http://acasoanalytics.wordpress.com/2008/06/18/portfolio-monte-carlo-analysis/