Speaking of promoting statistical thinking among students, I am mightily impressed by the Gapminder site, which visualizes data from the United Nation's Human Development Report 2005

.  In a couple of posts, I will review the nine chapters of animation from their site.

This first post concerns primarily the first three chapters which examine the distribution of income across the world.

Gapminder is a Swedish non-profit dedicated to utilizing visualization software to help enliven and disseminate social science data.  The quality of these animations is impeccable, taking full advantage of innovative web-based technologies to explain graphical constructs visually.  The site is invaluable for policy analysts needing to interpret the voluminous data, and for students of data visualization although seasoned statisticians will find the pacing too sluggish. 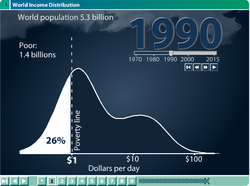 a) The log scale for $ per day was not explained.  In general, using the log scale involves a tradeoff: visual clarity is gained with better spacing between data but distances are distorted so that an inch on the left-side of the distribution is not the same (in terms of $ per day) as an inch on the right-side of the distribution.  In fact, the log transformation artificially changes the visual shape of the distribution.
b) The important concept of PPP, which holds the key to comparability, is used but not explained.  It is scary and sad to know that large portions of the world's population live on less than $10 per day (around US$3,600 per year), after already adjusting the number upwards to account for cheaper costs of living.
c) The tails of any income distribution get short shift in this presentation even though the tails are crucial to understanding income inequality.

An immediate question comes to mind, which is where more and less developed nations fall in this distribution.  Part of the amazing experience with this site is that the designers anticipated our questions and address them in later chapters.

This was not my favorite chapter and I note these 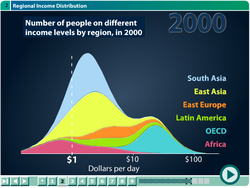 Problems:
a) The stacked area chart does not do the data justice!  The only distribution that is clearly visible is that of Africa (in pink) because it sits at the bottom.  All other distributions are layered on top of one another, totally distorting their shapes.  For example, the Latin America & East Europe distributions (orange, green) look like flat pancakes on this chart.
b) The above problem is multiplied during the "sliding timebar" animation. Changes in shapes over time as visualized are highly problematic.

III. The Changing Face of Poverty This chapter continues the graphical construct from the previous but hones in on the segment living below the "poverty line".

The same problems apply.  It is easy enough to note the temporal changes of those living at the poverty line but much harder to visualize these changes for people earning less than $1 per day.

In conclusion, Chapter 1 is chock-full of important concepts, and clever visual explanation but the graphical construct chosen for Chapters 2 & 3, that is, the stacked area chart, leaves something to be desired.  I'm eager to look at the other six chapters and will let you know what I think.

Thanks for very interesting reading! We have added some small questionmarks where users can at least get some explanation of the PPP and log scales. Please continue keeping an eye on our future moves.

We Epic Systems together with Beemode (www.beemode.com) have developed a Data Visualisation software almost ready to be released soon.

We are looking for ideas to promote the software.
You can view our preliminary version at :

Your comments will be appreciated.

Here is another link for a project we did with Princeton University on US unemployment :