I continue to review Gapminder's animations of the Human Development Report 2005.

The scatter plot construct allows easy understanding of correlation between two variables, the average annual income and child mortality.  Moreover, the "sliding timebar" shows this correlation was quadratic/non-linear in 1975 but linear in 2000 (but note log-log scale). 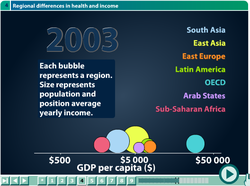 a) Readers of this blog won't want to hear my rant on bubble charts again (here, here and here).  The most important message of this chart concerns regional differences in per capita income and yet the visual message is dominated by the overlapping bubbles (i.e. population size). 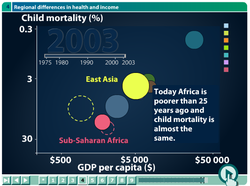 b) The size of bubbles also distracts when used in a scatter plot (see right), where the reader must identify the center of a bubble to figure out its x- and y- dimensions.  This becomes difficult when bubbles of differing sizes overlap and obscure one another.

c) The log-log scale requires careful interpretation.  For example, the statement cited on the right is erroneous because the change in child mortality rate in Africa actually dropped 18% (from 22% to 18%), rather than remaining "almost the same".  The confusion arises because Africa appears in the larger end of the log scale (for child mortality) where even small visual distances represent large separations in the raw data. 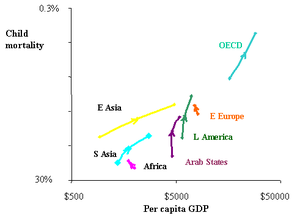 d) A clearer way to investigate changes over time is shown on the left.  Each line traces the development path from 1975 through 1990 to 2003.  Africa and Eastern Europe experienced negative per capita GDP growth.  Meanwhile, Latin America and the Arab States had stagnant economies but rapidly declining child mortality.  Asia, on the other hand, experienced fast growth but modest gain in child mortality.  Finally, the distance between the "high-income" OECD countries and the rest of the world is vast, especially when we note the use of a log scale.

Again, Gapminder anticipated this line of thinking and addressed this in Chapter 7.  However, the insistent use of bubbles makes their development path chart more muddled than our version here.

Overall, Chapter 4 is another valuable contribution to our knowledge of this data; the result would have been even better if they had omitted the population size dimension.

PS. Thanks to Hadley for pointing out the need to indicate the directions of the paths.  I have updated the chart now.

One (small) problem for your chart in d) is that you can't tell which way the trajectory is moving.

Great point. I should've put in small arrows to indicate the directions.

Also, in chart d), there is no need for multiple colors. I used colors only to link back to the original chart.

Much better! It's now easy to see that child mortality has been decreasing in every country (although the flipped axes seems a bit strange). Eastern Europe and Africa jump out as been the only two areas with an decrease in GDP.

I'd also be interested to see a plot without the labels.