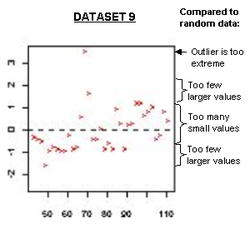 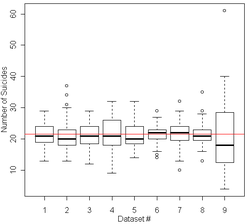 Last week, I posed the question of how one can ascertain if a data set is "random" using Golden Gate Bridge suicide data compiled by the SF Chronicle.  For review, see here (and less importantly, here).  I plan to document my own exploration slowly over a few posts as the material may be a bit heavy for those not trained in statistics.  Don't run away yet as I'll try to explain things in simple terms as best I can.

The random data imagine the scenario in which death-seekers randomly picked the locations from which to jump off the bridge.  While in theory there should be about 21.6 suicides at each of the 35 locations, the random data exhibited a wide spread, with some locations having the number of deaths over 2 to 3 standard deviations away from the average (norm).  Standard deviation is a way to measure the spread of data around the average value.

Staring at a graph like the one shown above, how does one decide whether the pattern is random or not?  I will, for now, stick to visualization methods. 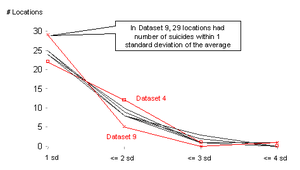 In my chart, there are 9 lines, each a dataset.  I identified two unusual lines by red color.  We have evidence that the real data (Dataset 9) is not random since the line deviated from most other lines.  This evidence is inconclusive because Dataset 4 also strayed even though it was randomly generated.

This illustrates why the question of randomness is tricky: we rely on strange (rare) behavior to detect non-randomness but strange things can happen randomly too.  Therefore, it is best to collect many pieces of evidence. The red line clearly stood out in this chart.  It is Dataset 9.  So we have stronger evidence still that it is different from random data.

Observe that for random data (the black lines), a steep rise occurred between 14 and 35 suicides, indicating that if randomly selected, most locations will see approximately 14-35 suicides.  By contrast, the red line rose fast at about 10 suicides or so, then saw less action in the 25+ range, and had an extreme outlier at 60.  In other words, the variance (spread) in the real data was higher than can be expected in random data.

These visualizations, of extreme values and cumulative distribution, faciliated our objective of comparing the real and the random data.  The difference showed up more potently here than in the scatter plots.

In a future post, I will look at other ways, both simpler and more complex ideas, to identify the important differentiator of variance.

On the popularity of bar charts

I and others have commented, to no apparent avail, on the inadequacy of the bar chart, or its variant, such as the paired/grouped bar chart.

These two examples appeared on the same day in the Wall Street Journal.  The junkchart versions, using line charts, are clearly superior in drawing attention to the key messages. 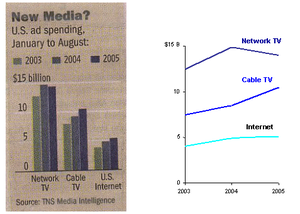 In the first example, the improved chart facilitates comparison on either the time axis or the type of media. 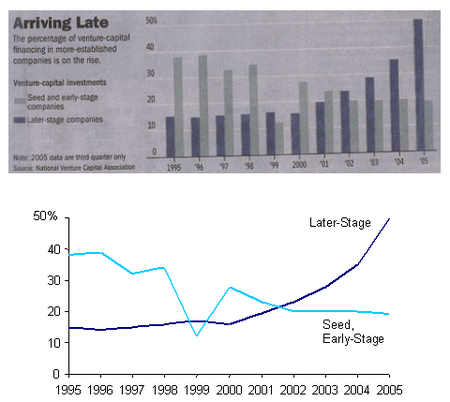 One other trend remains buried in both versions, that is, the total proportion of VC funds invested in seed, early and late stage companies increased from about 55% to 70% of the total in these 10 years.  One wonders what other investment type suffered during this period...

many contributions is the concept of "data-ink ratio": how much of the ink used to print a chart is used to show the data as opposed to, say, decoration?

This example, showing the quintile ranking of utility funds, has a very low data-ink ratio.  The dots serve only one purpose, to make the reader dizzy.  The data stands out once the dots are banished, as shown below. 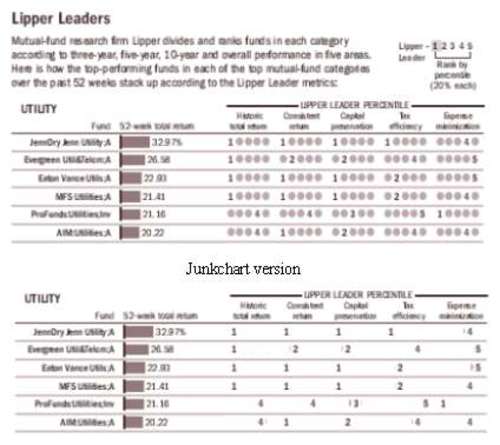 An analysis of "uh" "um" linguistic data is cited at Prof. Gelman's blog.  I highly recommend it.  My comments are at his site (tried to do a Trackback but didn't succeed).

Polling and the obvious

I noticed a creative but flawed attempt to improve upon the stacked bar chart.  In the usual stacked bar presentation, it is easy to compare the leftmost and rightmost categories, but not the middle categories.   For example (below left), try comparing the percentage who thought women's legal rights were the same against the percentage who thought family rights were the same. 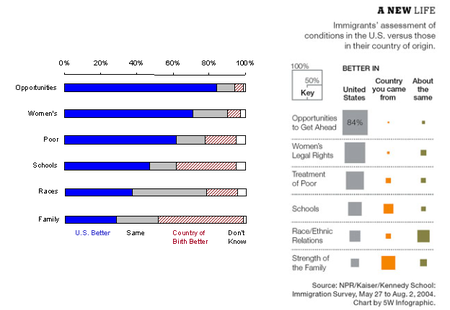 Above right, one designer's solution is to disaggregate the bars (blue, gray, red), turning them into columns of squares.

Disaggregating the bars is a good idea but the use of squares is unfortunate, especially when the relative percentage is made proportional to the edge length, not the area of the square.  Observe that one can fit four "50%" squares into the "100%" square.

I'd welcome any ideas that would improve upon the stacked bar/column chart.  How to make the middle categories easier to compare?

The poll itself raises more questions than it answers:

The sad tally 2: the data

The last post contained a little riddle: which of the 9 graphs (if any) is different from the other 8?  I will disclose the answer here soon so to avoid the spoiler, read the previous post first.

Here is the data gleaned from the graphic in the SF Chronicle (any error is purely mine):

There are two ways to solve the riddle.

First, one can think of it as a pattern matching problem: which of 9 graphs contain a pattern that matches that in the map?  This really isn't the point I was trying to make but I realize now that the question could have been interpreted this way.  In this line of reasoning, one needs to identify the features that distinguish the pattern in the map.  The most standout feature, for me, is the spike at location 69/70.  Only the last two graphs contain spikes near this location and more careful inspection will reveal the bottom right chart to have the real data.

Alternately, one can ignore the context (of the sad tally) and treat this as a problem of comparing probability distributions.  This was my original intent.  Is there an "odd man out" among the 9 distributions?

We now know that the bottom right chart contains the real data and the other 8 charts plot random data.  If the real data is the "odd man out", which features of the distribution allow us to differentiate it from the other graphs?  I'll discuss my findings on some features in the next post. 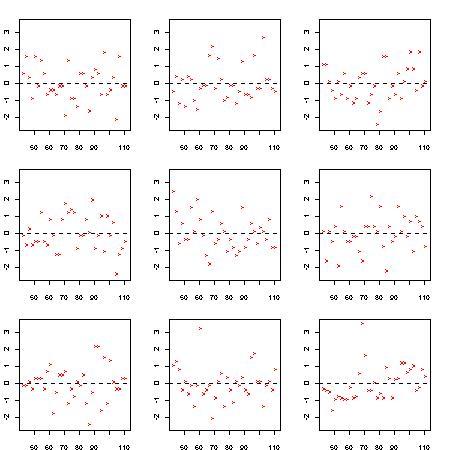 The rise of robots elicited an uninspired, robotic graphical response from the Economist, reprinted by Mahalanobis.

A first fix, shown on the left below, puts the two data series in a scatter plot.  If one accepts the existence of a linear relationship between 2004 installations and 2004 stock, one would be mistaken indeed as such a comparison is meaningless; for countries differ significantly in terms of the number of robots deployed (Japan has over 300,000 while many other countries have fewer than 1,000). 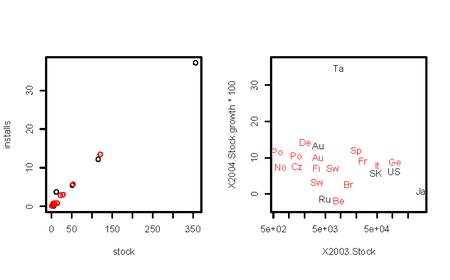 A second fix substitutes the 2004 growth rate for absolute number of installations.  It is now clear that the growth rate is not much associated with the size of the installed base, contradicting the perceived linear relationship from before.  (Note that the x-axis is plotted on a log scale.)  The European countries are shown in red, most of whom have grown their stock of robots at a higher rate than Japan.

In order to highlight the Europe/Japan comparison, one can plot the European average, rather than individual countries. The message is less murky because the graph is less busy. The following set illustrates this.  What really stands out from these graphs is China (& Taiwan), not Europe.  Incidentally, China was omitted from the Economist chart, which is a rather mischievous deletion -- but is understandable since China's data is hidden when they used the original data series of installations versus stock (green text on the left chart). 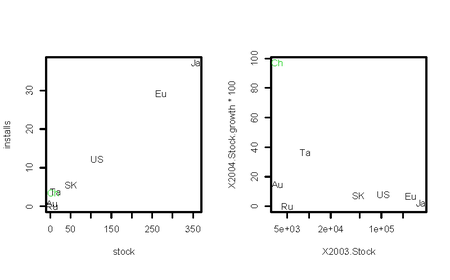 I'm writing this from a different computer while I'm travelling and I'm having trouble with the tools at my disposal.  Apologies for some glitches in the charts.