I return to the NYT article on income disparity, with a note and a discussion.  First, note that "the IRS data tend to understate incomes for those at the very top because of different rules for reporting wages and capital gains".

Second, they cited Bruce Bartlett, a "fiscally conservative Republican tax expert", who found it "remarkable" that

Mr. Bartlett may have been musing at this chart: 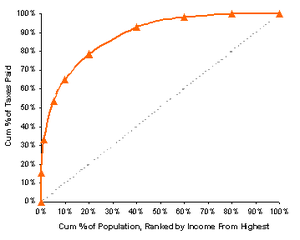 The level of inequality appears even greater than the income disparity.  Nevertheless, his observation commits the same fallacy as when left-leaning tax experts lament that the top 20% earned nearly 60% of all income (as we saw previously from the Lorenz curve).

It is the fallacy of the hidden strawman: both statements invite us to make comparisons to the diagonal line of the Lorenz curve, which is a strawman because that line of so-called "equality" is an irrelevance.  I have debunked the argument that a society in which everyone earns equal pay (e.g. the top 20% get 20% of all income) can function.  The idea that everyone pays equal taxes (e.g. the top 0.1% pay 0.1% of all taxes) is similarly absurd.

The key mischief of both these arguments is using a misleading scale.  A statement about the top 1% of taxpayer implies a ranking from highest to lowest of each taxpayer, followed by the removal of information about their differential incomes (or taxes paid), retaining only the ranks for analysis.  In effect, this change of scale (from numeric to ordinal) causes every consecutive pair of taxpayers to have the same difference in income (or taxes paid), which is obviously false. 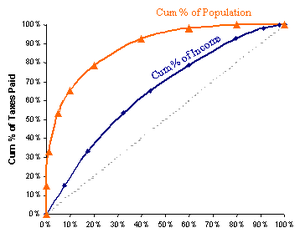 Observe also that the blue curve is much less steep at the origin than the orange curve (which uses the cumulative % of population on the x-axis), revealing that Mr. Bartlett's statement is grossly exaggerating.